I am fascinated by switching operations in a big yard. In my mind it is the most interesting aspect of operation. Much of the fascination probably results from three summers spent working for the Rock Island in the Armourdale Yard in Kansas City. (I also worked on a section gang for two summers before that, but that is another story.) I was a diesel fireman for two summers and foreman on the 3 to 11 p.m. train yard crew for one summer. The experience, especially the summer as a switchman, certainly has influenced the era I model and the kind of operation I am interested in.

As my layout moves from concept to design, one of the major hurdles is the creation of the main yard. I want as large a yard as I can work into the design. A big yard on a model layout represents some real compromises. Space given to a yard means space taken away from other things – the mainline, the branchline, and the industries which justify the existence of the railroad. One solution would be to give up on a major yard and rely on hidden staging. But I am really interested in operations and the yard is a major operation center. The challenge is to get the maximum number of tracks with good operation potential.

An important part of the plan is creating a yard environment that looks real. Real yards have to accommodate the “human factors.” During the past few months I have had the opportunity to visit quite a few layouts thanks to trips to Des Moines and Atlanta and the Gateway Division’s annual fall meet. At each layout I found myself looking most closely at the yards. How much yard has this modeler been able to incorporate into the overall design? How is it organized? What are the operational pluses and are there any minuses? What is modeled, what is suggested, and what is missing? 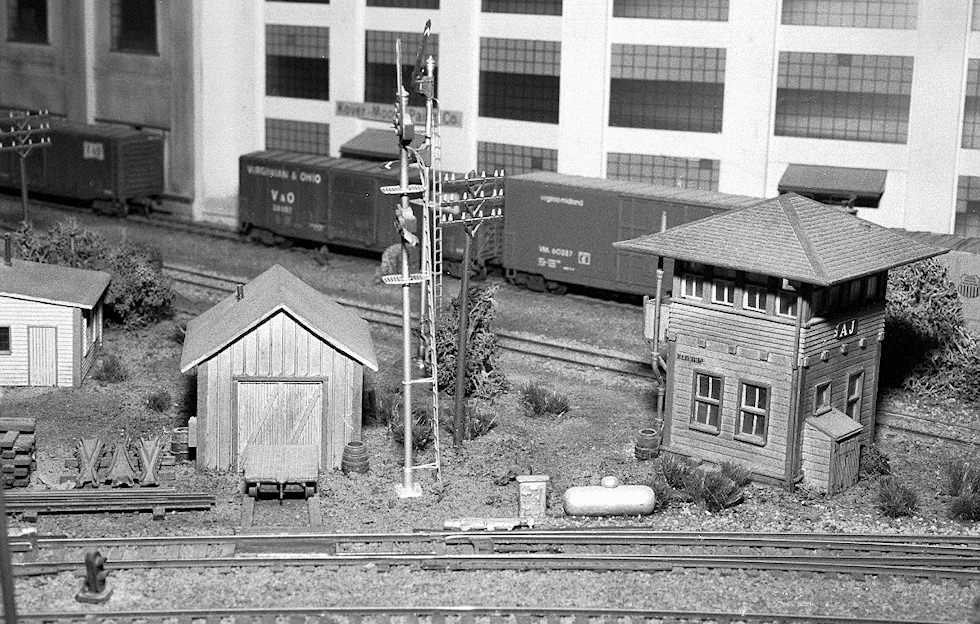 The first of these factors are roads and parking areas. Crews have to get to work. This means that there have to be roads that come all the way into the yard. There also have to be parking lots at the edge of the yard. How much parking is needed depends on the size of the yard and the era modeled. My prototype experience covers 1957 through 1961. My modeling cutoff is 1958. That means I am modeling in the days of five man crews. In Armourdale Yard in 1958 there were as many as ten crews assigned to the day and afternoon shifts. This means space for thirty switchmen to park cars near the yard office. Engine crews reported at the roundhouse. Parking space was needed there for another twenty. And this is only covers the operating crews. There were gandy dancers, car knockers, hostlers, a yardmaster, a trainmaster and a lot more people whose jobs and titles I don’t remember. There must have been at least a hundred people working in Armourdale on one shift on any given day. Obviously no one want to provide that many parking spaces on a layout, but creating the illusion of reality in a model yard means that roads and parking have to be included. Most modelers aren’t going to build a yard the size of Armourdale, but even a medium sized yard would have several crews. So roads and parking lots have to be included in the design.

In my days on the Rock Island, crews got a thirty minute dinner break. It was “dinner” regardless of whether it came at 4 a.m., noon, or 9 p.m. In Armourdale we put the locomotive in the “belly” and “went to beans.” There was a cafe just on the edge of the yard. It was a real greasy spoon operation, but it was where nearly everyone ate. It wasn’t owned by the Rock Island but as close as it was to the yard office it was probably on Rock Island property. It was open 24 hours a day, every day of the year. Railroads don’t shut down for holidays and the cafe served crews. It wasn’t very big. The counter was L-shaped and the place could probably serve no more than twenty people at one time. But, it was an essential part of Armourdale. Realism in the model means I have to try to figure out where to put this.

The next piece of the human factor involves the union and management relationship. Once a week job openings were posted for bids. There were announcements of meetings, contract negotiations, and all sorts of miscellaneous information from both union and management. Regulations required that these notices be posted where every crew member had access. Engine crews found theirs on a big board in the office at the roundhouse. Switch crews found theirs on the second floor of the main yard office. This means that the roundhouse on the layout needs to have an office area as well as stalls for servicing engines. The yard office was located in on one edge of the yard and in the middle of the east-west length. So there is another structure which needs to find space on the layout.
Eight hours is a long time and during that time it is going to be necessary to go to the bathroom and there isn’t a toilet on a switch engine. When you have to go, you have to go. There weren’t a lot of places in the yard but besides the facilities in the roundhouse and yard office there were a couple of pretty crude buildings about the size of a one seat outhouse but with indoor plumbing. At least one of these was located near the far end of the yard away from the roundhouse. It was a logical location because there weren’t any other office facilities at that end. Years ago there was a regular column in the NMRA Bulletin on “biffys.” Yards have to have them.

Other small structures scattered through the yard allowed a crew to get out of the rain and snow while they got the next set of moves from the yardmaster. These building would be a good scratch building project since they are nothing more than four walls, a door, and a roof. The building were 8 or 10 feet wide, not more than 6 feet deep and maybe 8 feet high. There was no foundation and the floors were usually dirt. The switch shanties were pretty crude but they too served an important function.

We must include tool sheds for the section gang. These were even smaller than the switch shanties but they did have a padlock on the door to secure the tools at the end of the day.
At the east end of Armourdale there was another essential structure. I don’t remember the job title, but the guy who worked there was the person who got transfer drags clearance to leave the yard and go out onto Kansas City Terminal trackage. This building was a little nicer than the shanties since somebody was in there 24 hours a day. It had a couple of windows and there was a stove for the winter.

One final human factor to consider. Road crews are at home on one end of the run and have to “layover” at the other end. During my two summers as a fireman, I got called several times for a Kansas City to Herrington, Kansas road turn. Herrington was home for the crew on this run except for me. When I got to Herrington I had to find a place to stay. The Rock Island didn’t put me up and they didn’t pay my hotel bill. I needed a place close to the yard and cheap. About two blocks from the yard office there was a railroad “flop house.” It probably only had six or eight rooms to rent. For about $8 a night I got a room and a bath – down the hall. It was a two story wood structure not much bigger than a big home. It wasn’t fancy, no pool, no TV, single bed, one straight back chair and a small table in the room was it. The only people I remember staying there were railroad employees.

In Herrington too there was a railroad beanery, just like the one in Armourdale – it was a very short walk from the yard. In fact you passed it on the way to the flop house.

Everything we do in modeling involves some trade offs. Compress this building so it will fit into the space. Put that track through the bathroom because it is the only way to get a return loop from that end of the layout. I know that it is impossible to put every one of the human factors into a yard. But a switch shanty at one end, and a lean-to office attached to one wall of the roundhouse will help to create the illusion. Add a couple of roads and a couple of parking areas and it becomes clear that there are people at work. The next time you look at your yard remember the human factor.

Freight Yards: What Are All Those Tracks?, Part III

See all articles on Freight Yards