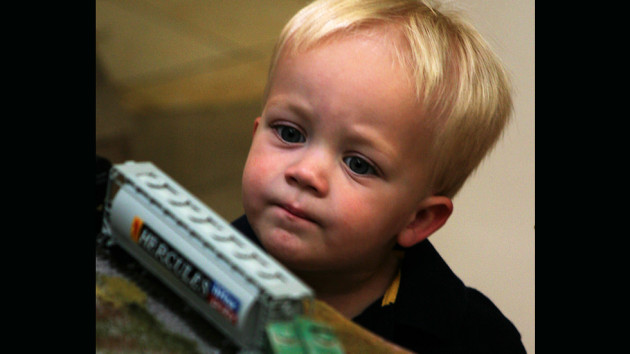 The Gateway Division’s annual “build it, show it, give it away” project is now in its fourteenth edition. This version of the Gateway Central is HO scale, 4’-0” wide by 6’-10” long, and fits in the back of a minivan.

The GCXIV has been shown at area train shows, including the Great Train Show and the Boeing swap meet, and in a new effort to spread the word about model railroading more widely, it has been displayed at area shopping malls, such as Chesterfield Mall and West County Mall, as well. The project layout always catches children’s attention at train shows, but of course those are kids whose parents are already interested enough in trains to attend the shows. At the malls, kids who might not otherwise see a model train in action get the chance.

The layout stands up amazingly well to being loaded into and out of vans, carried through malls, and being poked and prodded a certain amount by delighted viewers. The track plan is the inevitable oval, with a passing siding, industry tracks, and a branch that could be used to lead to future expansion. The largest industry on the layout is a Walthers Cornerstone Series ‘Valley Cement’ plant, with process buildings, rotary kiln, storage silos, covered loading, conveyors, and smoke stack. The stack and conveyor add a strong vertical element not often seen in small portable layouts. The heart of a cement plant is the rotary kiln, an enormous, rotating steel pipe in which crushed limestone is sintered to form cement. The elaborate cement distribution system at the top of the storage silos is especially well modeled. Mike Satke reconfigured various elements of the kit to fit the available space. Added details include numerous trucks, figures, and a great job of weathering the extensive corrugated iron siding and roofing.

The factory of ‘Wil B. Krummie Custom Cabinets’ – as you might guess from the name, this is another Mike Satke creation, this time an extensive kit-bash of Walthers brick factory buildings. Bob Boedges scratch-built the rear loading dock to better fill the space between the building and the mainline. The cabinet factory siding runs right through the building to provide weather-protected unloading of wood and other raw materials. The other siding in this corner of the layout is the team track. The dock, office, and even the overhead crane were all put together out of Boedges’ scrap box.

Tim Stout and Dick Wegner were among the members who staffed the layout and information table at the mall, while Lee Durham and Tom Bousman did  much of the hauling of the layout to and from the train shows and malls. Atlas Model Railroad Company was especially generous in donating the necessary supplies and equipment for this Gateway Central layout. Not only did Atlas donate all the track and turnouts, they provided the power pack, a Quantum Engineer sound and accessory control system, and a sound-equipped locomotive. If there’s anything that thrilled the kids even more than seeing the trains run, it was pushing the buttons to blow the horn and ring the bell!

The Gateway Central is the prize in the Division’s annual raffle. Proceeds from ticket sales cover the cost of supplies not donated, with the excess used to pay for Division operations, such as printing and mailing of the RPO. The bright colors of modern railroad rolling stock (especially that Santa Fe Kodachrome paint scheme) catch the eye, and highly detailed, individual scenes hold viewers’ interest. The drawing of the winning raffle ticket will be at the Gateway Division’s Fall Meet, on Saturday, November 3, at Trinity Lutheran Church. This will be your last chance to see the Gateway Central XIV before it’s delivered to the lucky winners.

Each year’s Gateway Central provides our best opportunity to reach out to the general public, who might not otherwise have any exposure to model railroading. It is also a modest fundraiser, and can be a lot of fun and accomplishment for those who help build it – what other layout have you ever seen built from start to finish in a matter of weeks? Of course, it’s also takes a lot of time, effort, and dedication on the part of Division members.

About the Author
Mike Thomas has had a life-long fascination with trains, both model and prototype. He is especially interested in the railroads and industries of eastern Missouri and his native Saint Louis, recently focusing on the Mississippi River & Bonne Terre Railway in the 1920s. Mike is an architect with his own practice; most of his work is residential and light commercial projects. He and his wife, Nancy Pope, live in the City's Shaw Neighborhood, a few blocks south of where the Oak Hill line departs from the old Missouri Pacific main.
Social Share