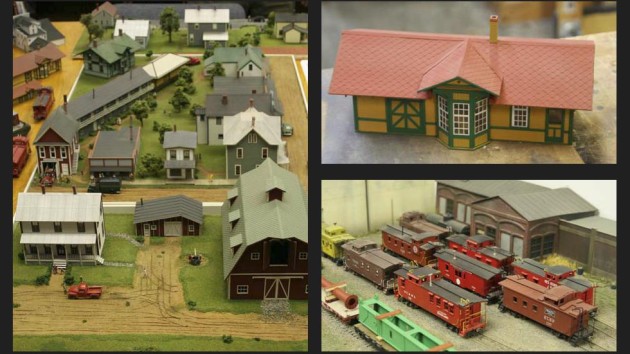 It was a beautiful, sunny morning when 19 Gateway Division NMRA members gathered outside the door of American Model Builders, Inc., on Saturday, August 23, at 11 AM. John Hitzeman, owner of AMB, greeted us at the door.

We were led inside to a room that could best be described as “modeler’s heaven.” On shelves alongside walls and on tables around the room were dozens of examples of models made by AMB. More importantly, the models showed the creative artistry of one person, namely, John.

For well over two hours John held the attention of his audience with many interesting anecdotes, from the early years of his life when his father and grandfather introduced him to model trains and real trains, to later in his life when he sharpened his modeling skills working at Monsanto Co.’s Engineering Model Dept., to the first day he started his own company, American Model Builders. During the course of his tour, John explained how he came up with ideas for structures and other products, mostly based on prototype examples but sometimes with no basis at all, just simple “Imagineering.” He described how he became interested in laser cut manufacturing. That curiosity grew into the making of AMB’s major business, LASERkit wood structure kits. Today, AMB is looked upon as the hobby industry’s leader and standard setter in manufacturing laser cut kits.

Of course, with the high degree of skills and quality work exemplified by John and his staff, not all of AMB’s business is identified with model railroad kits.  A fair amount of his business also comes from the commercial business world and the federal government. In fact, AMB has a reputation for doing things that other modeling companies won’t do.

We were then led into AMB’s “shop” area. Of particular interest to everyone were the two large laser-cutting machines. John proceeded to give an operating demonstration on how the laser system works. He keyed in instructions and engaged the machine. As everyone watched, the machine started making an HO ATSF Standard Telephone Booth. We each received a finished kit.

What takes place after John and his staff create a new model is not simple, for sure. Very precise, detailed instructions must be programmed into the laser machine. Even more simplified, detailed instruction sheets, along with drawings and photos, need to be created to accompany the finished kit. Sometimes these instruction sheets can be over 30 pages in length. Raw material costs continue to increase dramatically and put pressure on AMB. But yet the quality of the kit continues to be paramount.

Soon it was 1:30 PM. John completed his tour, the last of the questions were answered and everyone thanked John for a great time and the gift kit. The overall success of AMB can be attributed to John’s creativity, attention to detail and a passion for quality in what his company makes. It’s got to be great to love your job and make a successful living from it.