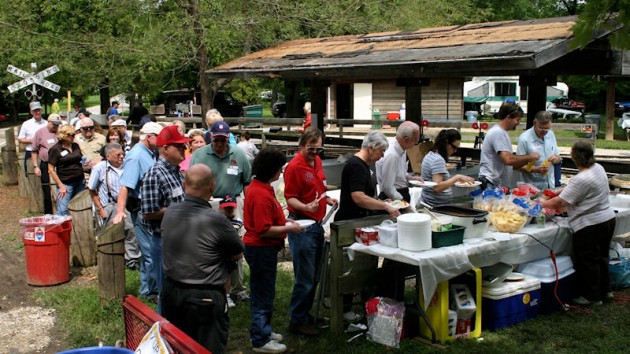 On Saturday, September 6, 2008, the Gateway Division NMRA and the St. Louis Chapter NRHS held the first ever joint picnic at the Wabash, Frisco, and Pacific Railroad. The WF&P RR runs 12 inch Gauge Small Scale Steam Trains alongside the Meramec River at Glencoe, Missouri. It provides a 2-mile roundtrip. From 1939 until 1959 it was located near St. Louis Lambert Field. As they say, the only scheduled steam passenger trains in Missouri. See the photo gallery from this event.

The weather was great, the steam locomotive rides were many and the scenery along the Meramec River was beautiful.

The steam club from Decatur brought their Denver & Rio Grande locomotive down to pull trains. The WF&P provided four steam locomotives and one diesel engine. There were train rides all day. The WF&P and the Decatur club were very gracious hosts and they enjoyed having us there as much as we enjoyed their facilities.

The committee and both organizations thank you for your attendance and any and all help and donations that made this picnic a success. Ron especially wants to thank the above named volunteers, for without them this event could not have been held.