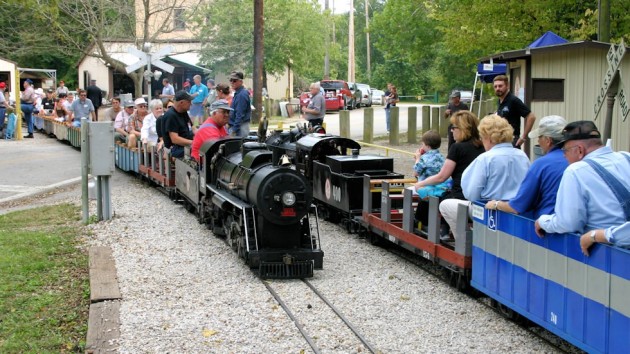 On Saturday, September 19, 2009, the Gateway Division NMRA and the St. Louis Chapter of the National Railway Historical Society held the second annual get-together picnic of these two fine train groups at the Wabash, Frisco, and Pacific Railroad, in Glencoe, Missouri. The WF&P RR runs 12-inch gauge small scale steam and diesel trains alongside the Meramec River. It provides a 2-mile roundtrip. From 1939 until 1959 it was located near St. Louis Lambert Field. As they say, these are the only scheduled steam passenger trains in Missouri.

The weather was great, the steam and diesel locomotive rides were many, the scenery along the Meramec River was beautiful and some new train friends were made. Best of all, people had fun. This year there were 156 registered members, their families, and guests from both groups in attendance, up from 95 last year, along with 25 crew members from the WF&P and two from the Northview & Frisco RR of Strafford, Missouri.

The Northview & Frisco RR brought their 4-4-0 steam locomotive to pull trains. The WF&P provided several steam and diesel locomotives. There were train rides all-day, even doublehead running of locomotives. There was also a tour of the WF&P facilities. The WF&P RR and the Northview & Frisco RR were very gracious hosts and they enjoyed having us there as much as we enjoyed their facilities.

Many members of both groups donated about 150 attendance prizes of all values this year, so just about everyone got a chance to win something.

Our picnic crowd was hungry and thirsty for they consumed 220 cans of soda, 25 pounds of potato salad, 19 pounds of cole slaw, 4 gallons of baked beans, 136 hamburgers, 80 hot dogs, 8 pounds of baby carrots, 9 big bags of potato chips and 288 cookies.

The Officers’ of the Gateway Division NMRA and the St. Louis Chapter NRHS thank the members, families and guests for their attendance, their help and their donations that made this picnic a great success. Ron especially wants to thank the above named volunteers, for without them this event could not have been held.