In order to supply the packers with material, I needed a place to receive animals. Walther’s Stock Yard kit fit the bill nicely, but required a little dressing up.

I started by assembly the kit according to the directions. Since I intended to include sheep and pigs along with the requisite cattle, I included shelters over two of the pens in the kit for hogs. This provided two sheltered pens and four pens open to the elements. Before completing assembly by installing the gates and roof, I sprayed the pens and ground as well as the gates with inexpensive walnut pigmented gloss enamel. I followed this with a misting of flat black to deaden the shine of the gloss and give the wooden parts the appearance of creosote. After the paint dried, I finished assembling the kit.

Since the soil in the yard would not be black, I mixed brown and tan acrylic craft paint, thinning the concoction with rubbing alcohol. I did not mix the paint thoroughly. I covered the ground in the pens and chutes with this wash and allowed it to dry. I then weathered the entire stockyard with acrylic paints dry brushed and washes. 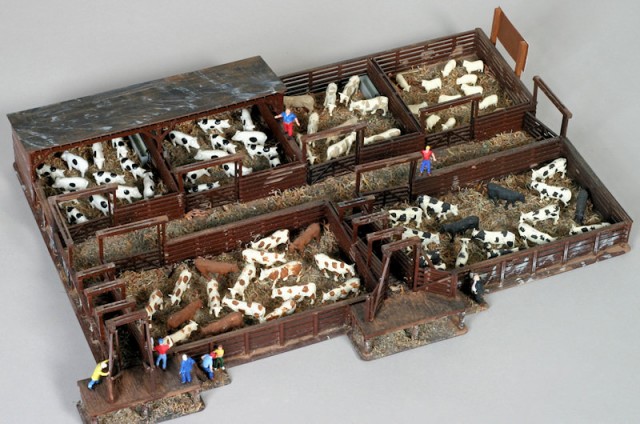 Next, I assembled water troughs for each pen from strip styrene. Each trough stands about two feet tall. The troughs for the larger pens measure about a scale two feet by ten feet, while the smaller pens received troughs measuring one and one half by seven scale feet. The exact dimensions are not as important as the presence of a watering container in each pen. I sprayed the troughs with gray primer and washed them with a mixture of tan and gray. I then bent fill pipes for each trough and sprayed them flat black to simulate black iron pipes. I glued the troughs into each pen. I then drilled a hole in the base at one end of each trough and inserted the pipe, which I glued from the bottom. This job would have been much easier if I had done it before attaching the roofs.

Ground cover presented a quandary. I attempted to cut twine and apply that as straw, but the results left much to be desired. I put the question on the back burner for a few days. While cleaning out the pencil sharpener at work I realized that the pencil shavings might just provide the texture I sought. I bagged the contents of the sharpener and took them home. After sitting a day or two, I spread white glued thinned with an equal amount of water in each pen and chute and sprinkled shavings over the glue. The time the shavings sat allowed me to apply just shavings and little graphite. After the glue had dried for a day I turned the stockyard over a wastebasket to remove excess shavings. 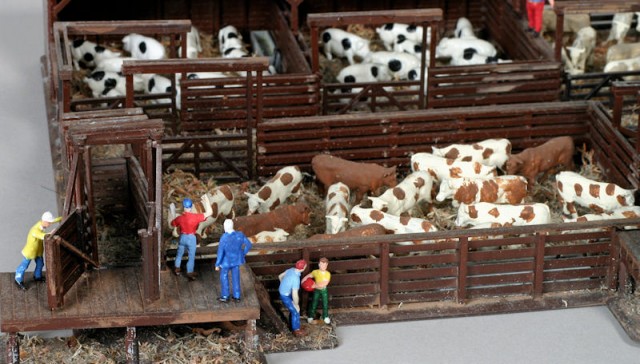 Now was the time to add animals. I painted three sets of Walther’s cattle. Two coats of antique white acrylic craft paint provided a base color. I then painted about half the cattle brown, both solid and spotted. About half of the rest received tan paint, while the balance received black. I purchased a set of Atlas sheep and found them much too white. To rectify this, I applied a coat of antique white to the sheep as well. I also purchased several sets of white pigs with black spots produced by Boley. Since the spots were glossy, I sprayed the hogs with Testor’s Dull Cote.

After removing the sheep from their bases, I glued a dozen in one pen. Next, I glued the pigs in the two pens with cover. The cattle then occupied the remaining three pens. For the most part, I tried to put an odd number of animals in each pen, since this tends to make the exact number less obvious.

Preiser figures were then added to complete the scene. Altogether, I was quite pleased with this simple sprucing up of the Walther’s Stock Yard. Although I may yet add a shack for the workers, at least the stock cars and the cattle in them have a destination on my layout.