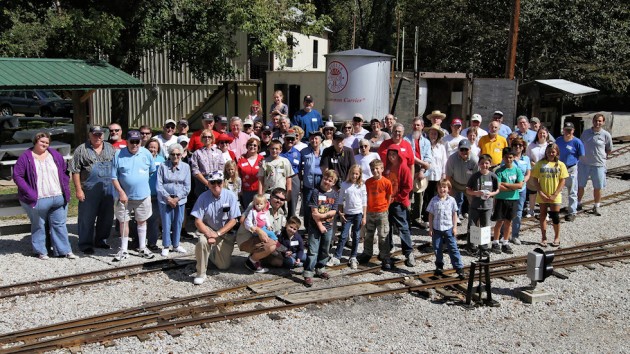 On Saturday, September 25, 2010, the Gateway Division NMRA and the St. Louis Chapter NRHS held the 3rd get-together picnic of two fine train groups at the Wabash, Frisco and Pacific Railroad in Glencoe, Missouri. The WF&P RR runs 12-inch gauge small scale steam and diesel trains alongside the Meramec River. It provides a two mile roundtrip ride. See the photo gallery from this event.

The weather was great, the steam and diesel locomotive rides were many, the food, drinks and snow cones were plentiful and the scenery along the Meramec River was beautiful. Some new train friends were made. But most of all people had fun.

This year there were in attendance 105 registered members, families and guests from both groups, along with an additional 17 crew members from the WF&P RR.

The WF&P RR provided several steam and diesel locomotives. There were train rides all day. The WF&P crew were very gracious hosts and they enjoyed having us there as much as we enjoyed their facilities.

Special thanks go to Bud Anderson and Alex Ford for providing free snow cones to the people at the picnic. Many fine compliments were made about the cool, refreshing and tasty snow cones that were provided. Each year Bud and Alex have brought their equipment, the ice and the many tasty flavors as well as donating their time to the event.

Many members of both groups donated a large number of attendance prizes this year, so just about everyone got a chance to win something.