Modeling From the Prototype – the Buffalo Creek & Gauley 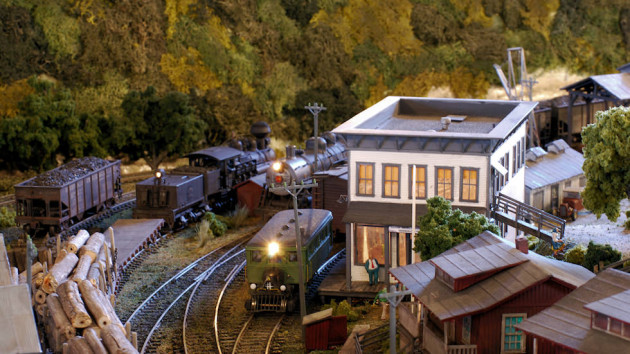 I am a long time B&O fan. Recently I became interested in the Buffalo Creek & Gauley through Deane Mellander’s and Bob Kaplan’s “B&O Steam Finale Volume 1” and Brooks Stover’s BC&G website http://www.buffalocreekandgauley.com. This would be an ideal short-line to model with the B&O and that I could model prototypal because of its short length and the information available. Contact with former employees and residents was established through the Internet and I now had an excellent sources for information…it could not be better.

Through the use of the Internet and topographical maps, I developed my HO layout plan, which uses all the space in one basement room that is 27’-6”x17’-8” and most of an adjacent 27’-6”x8”-0” space. The B&O is point to point with staging in the East at Cumberland, MD and in the West at Charleston, WV and Parkersburg, WV. At mid-point is Grafton, WV, a division point with yards, engine facilities, local industries and the entrance to the B&O’s Cowen sub-division, which goes into the adjacent space. The BC&G interchanges with the B&O at Dundon, WV, which is between Grafton and Charleston, WV. The 18.6 mile BC&G runs between Dundon and Widen, WV, where there is a large coal mine and just outside of Dundon, at Avoca, the Elk River Coal & Lumber, a logging line connects with the BC&G and brings logs to the saw mill at Swandale, WV. The B&O Cowen line runs to Richwood, WV and at Holly Junction the dual gauge HO – HOn3 West Virginia Midland connects with the B&O. The WVM hauls coal, lumber and vacationers that are going to the Webster Springs Resort. The time period is the 50s, steam and diesels were both in use on the B&O. And Digitrax DCC was chosen for operations and all locomotives have DCC/sound.

My layout construction methods are a little unique, as stairs currently present a problem for me because of back and hip problems. So, I am building detailed modules in my dining room that will be moved to the basement and connected together. The modules are completed down to the last detail. Building this way, I get to work on variety of construction projects, that when connected will present a completely detailed layout. The disadvantage is it is not operational until assembled, but I get my operational needs fulfilled, for now, through a Thursday night operations group and a very understanding wife.

The BC&G had three steam 2-8-0’s and I have modified two Bachmann 2-8-0’s to resemble #4 and #13 and rebuilt a Tenshodo USRA 0-8-0 into a 2-8-0 to resemble #14. I also scratchbuilt their Mack Railbus “A”. My ERC&L has 3 engines in its roster; the WVM has 4 that I built and the B&O has 46 engines in its roster, ranging from a 0-6-0 to 2-8-8-4’s, many of which I built and/or modified. Since I decided to prototypically model the BC&G, I have included Dundon, Avoca Wye, Cressmont, Swandale, Widen with their principle features. There is a little freelancing involved with other railroads, but some of their principle equipment, features, towns and industries are included to capture their character.

To add some fun operationally, all westbound B&O trains from Cumberland, except the Cincinnatian, require doubleheading or helper service for 17-Mile Grade (17 feet). Also, for operating fun, engines are prototypically served or changed at Grafton along with the crew. Even the BC&G doubleheaded, at times, bringing a long string of empty hoppers from Dundon to the mine at Widen, which was an average grade of 2%.

Since I cannot exactly replicate these railroads, my goal is to capture their character and surroundings and bring them back alive through my layout. As research tells me more about them and if possible, I plan to incorporate the new information into my layout. When I found photos of the Dundon B&O station, I made a new station and replaced the one that I had built previously. When photos of Bowers Coal Sales and the stairway by the Dundon station were found, I built models of them and added them to my layout. The building will be a never-ending project and hopefully, a constantly improving one. Welcome to hills and hollers of West Virginia and the 1950s.

About the Author
Phil Bonzon MMR is the is the Mid-Continent Region's Vice President, and Gateway Division's AP Chair and Assistant Superintendent. He enjoys operations and models the transition era B&O, BC&G, ERC&L (HO) and WVM (HOn3) set in West Virginia. Phil is a prolific model builder and has consistently built Divisional, Regional and National contest award winning models. He is the retired President of Cupples International Inc., an international curtain wall contracting company.
Social Share
One Comment