Putting on the Rex – Building A Model Movie Theatre

Having obtained the kits needed for the industries on my layout, I have started constructing off line structures as well. Rather than randomly placing various businesses, I made a list of typical businesses you find in the average city, as well as establishments which graced the city of Belleville, Illinois. I try to match each structure I build to the look I am trying to achieve; hence the aforementioned list of businesses.

At a swap meet I purchased “Uncle Al’s” United Grocery produced by Pola and sold by International Hobby Corp. This kit features two structures: the grocer and an auto repair shop. The walls are modular, allowing for easy kit bashing. I decided to make the auto shop into a restaurant and the grocery store into a movie theater.

The first step in project like this is research. I already pictured the basic look I desired, but needed to fill out details of the theater. I entered “movie theaters 1955” into Google and hit images. I selected a half dozen similar to my project and pasted them into a Word document. One thing I noticed is that movie theaters once sported a great deal of architectural detail. I also noticed that posters promoting upcoming films adorned the exterior of the theaters. The marques may or may not advertise both features showing. In addition I photographed the Lincoln Theater in Belleville. While I am not modeling the Lincoln specifically, it also served patrons during the era I model. 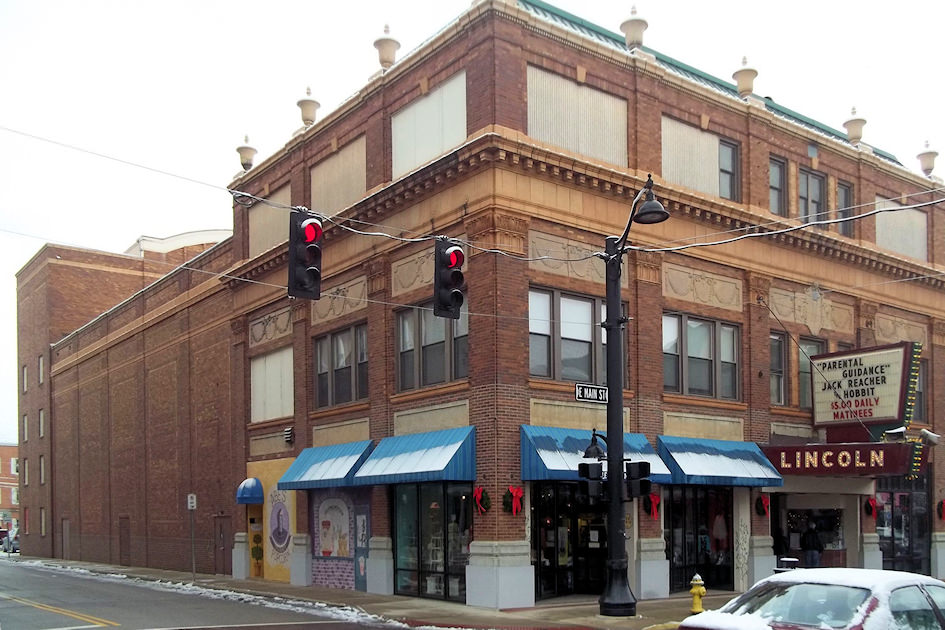 Having worked at the Lincoln while in high school, I learned a great deal of its history as well as the movie business. The building is huge in modeling terms: eighty feet wide, a hundred and twenty feet deep, and six stories tall. Mr. Wright, the owner, once worked for the Bloomer Amusement Company and told me about the history of movie theaters in general as well as in Belleville in particular. Bloomer’s first theater was the Rex, which is the name I chose for my model. From a picture I saw years ago, the Rex present a much more manageable prototype to model being only a couple of stories tall as well as a far more modest foot print than the Lincoln. 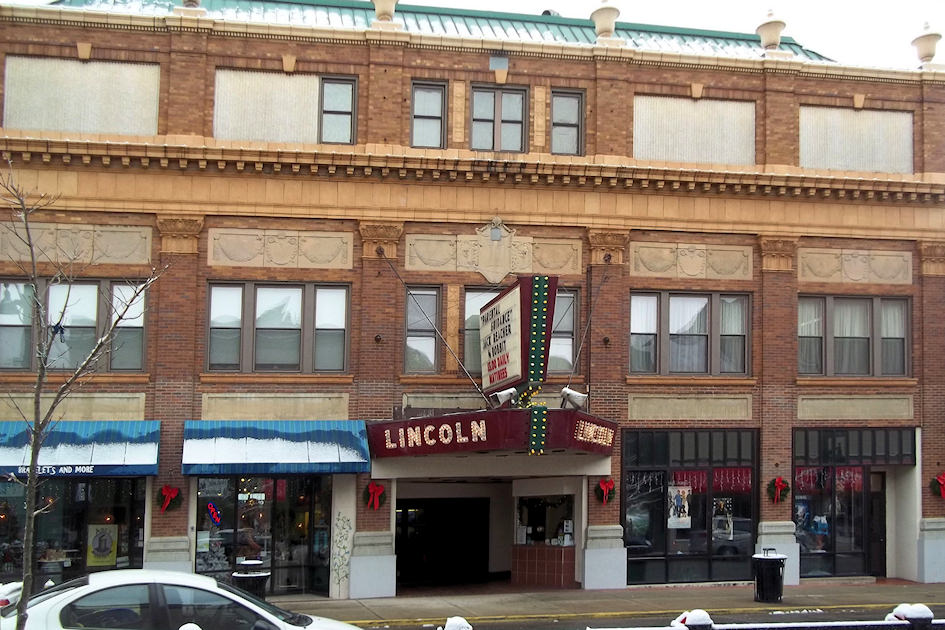 Both the Lincoln and the Rex, like most early theaters, lacked concession counters when they were constructed. The bathrooms were in the basement. Tickets were purchased at a window: Outside the entrance of the Lincoln, inside at the Rex. Both sported balconies. The main seating galleries sloped gently down below street level. Windows adorned the upper reaches of the walls covered by heavy curtains and eventually bricked over. Both boasted stages, which opened at street level for loading and unloading of properties, costumes, and supplies. The curtains at the Lincoln were drawn straight up into an additional loft while those at the Rex were gathered up. The next area of research concerned movie posters. I visited Wikipedia and searched for a list of films released in 1955. I selected several from the list and visited their entries in Wikipedia. A picture of the original posters appeared with the entry. I copied a sampling into another Word document. I resized the posters to HO scale. I also created lettering for the marque announcing the feature film: Alfred Hitchcock’s “To Catch a Thief.” 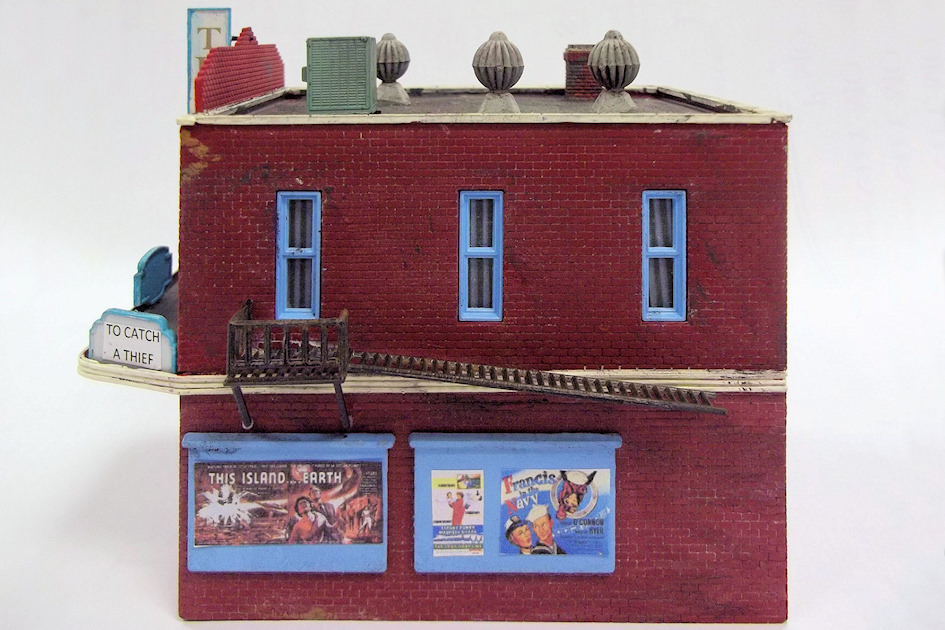 For the restaurant, I asked my father for names of restaurants he remembered in the area during the fifties. To my surprise he related how his best man almost opened a restaurant in Belleville. Apparently the property Luigi looked at could support the expanded parking lot he required for his pizzeria. To those from the Florissant, Missouri area, this is the same Luigi who operated a restaurant there for years. 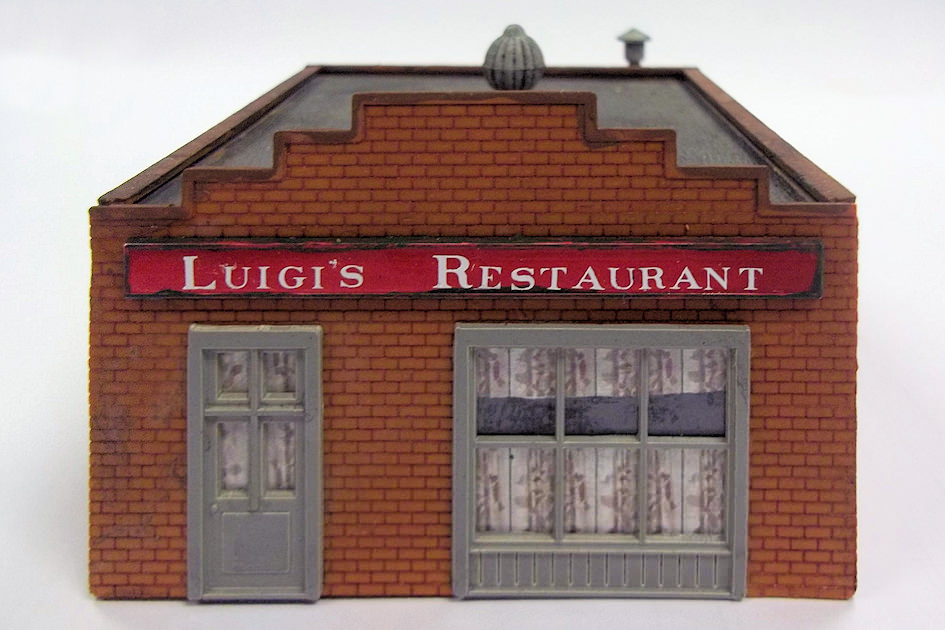 Next I tackled construction. The first change I made was to swap one of the solid side walls of the repair shop for one of the side walls with window openings. I assembled both structures, putting the remaining wall sporting window openings on the second story of the theater. I constructed a lean-to from another kit to the back of the restaurant to serve as the kitchen, substituting a metal roof from Evergreen. I added a canopy to the front of the theater using Evergreen 0.060” sheet cut six feet deep and the width of the building and tapering in two feet on each end at the front. I filed the front corners to round them and then added 0.125” by 0.002” styrene to the edge of the canopy and extending it the length of the side walls. Not only did this add a nice architectural detail, but the trim also greatly strengthened the connection between the building and canopy. I added pieces of 0.020” square styrene to the top and bottom of this trim as well as a piece of 0.015×0.020” styrene down the middle. 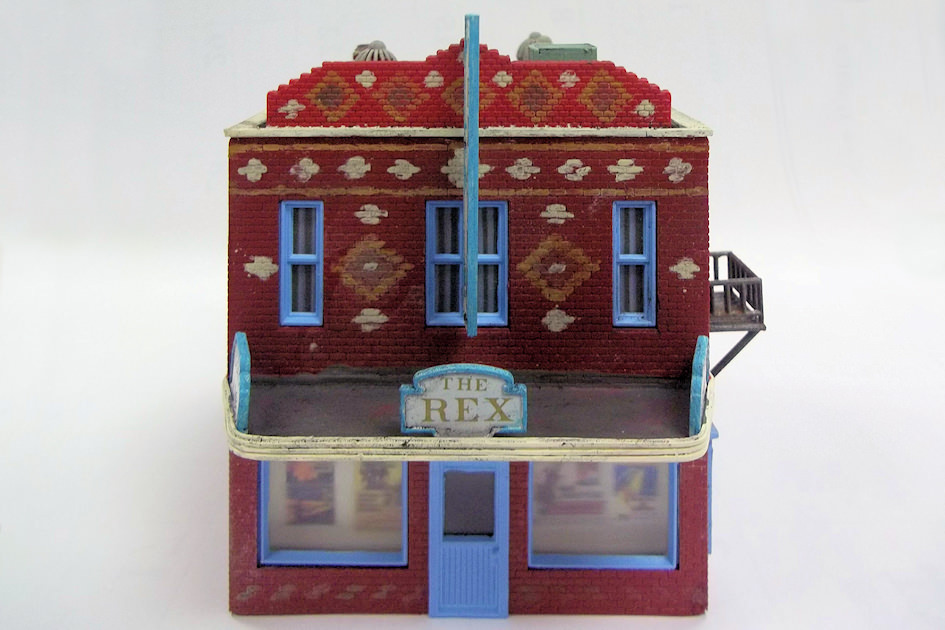 To the top of front of the theater, I added a piece of brickwork from the “Dan’s Produce Market” kit sold by IHC. I also added roof vents to each building as well as a chimney scavenged from a Design Preservation Models kit. I assembled the fire escape separately to make painting and detailing easier. Left over signs from Cornerstone series kits by Walther’s provided the signage required by a movie theater. The sign provided for Uncle Al’s Grocery was selected to serve the restaurant. 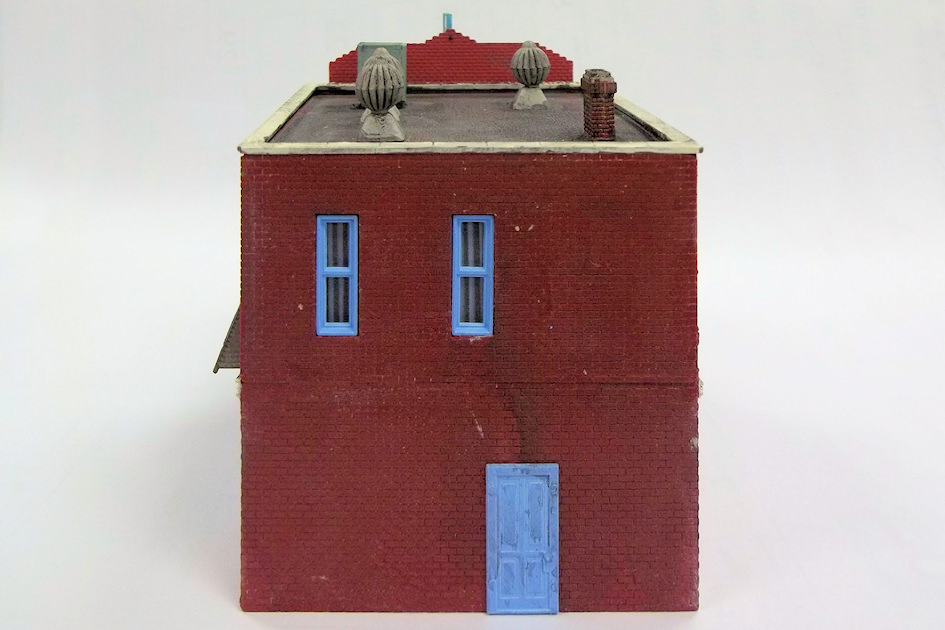 I sprayed the theater fire red and the restaurant pumpkin orange. I divided the windows, bill boards, and doors, spray painting them along with the lean-to to complement the colors of the brick of each of the structures: light blue and grey respectively. I painted the trim of each structure with acrylic craft paints. I also detailed the brick work of the theater using a 10/0 brush. The trim, the underside of the canopy, chimney, roof, and roof vents also received craft paint. Tuck pointing consisted of washes of acrylic craft paint thinned with alcohol. Since movie theaters received air conditioning early, I added a Walther’s cornerstone air conditioner to the roof of the theater supporting it with a pair of six by six timbers painted black to resemble the tar typically of such installations. The air conditioner itself a black wash applied to the grills. The signs for the theater gained white faces with blue trim, while the sign for the restaurant received red with green trim. I lettered all signs using Microscale decals, using gold for the theater and white for the restaurant. After installing the windows, glazing, and signs, less the marque lettering, I weathered the building with acrylic/alcohol washes. I added the posters and signage last since these would not show much weathering. I added curtains, draperies, and blinds to the windows to hide the empty interiors. The blinds on the restaurant came with Uncle Al’s while I selected the curtains and draperies from on line listings by JC Penney’s. 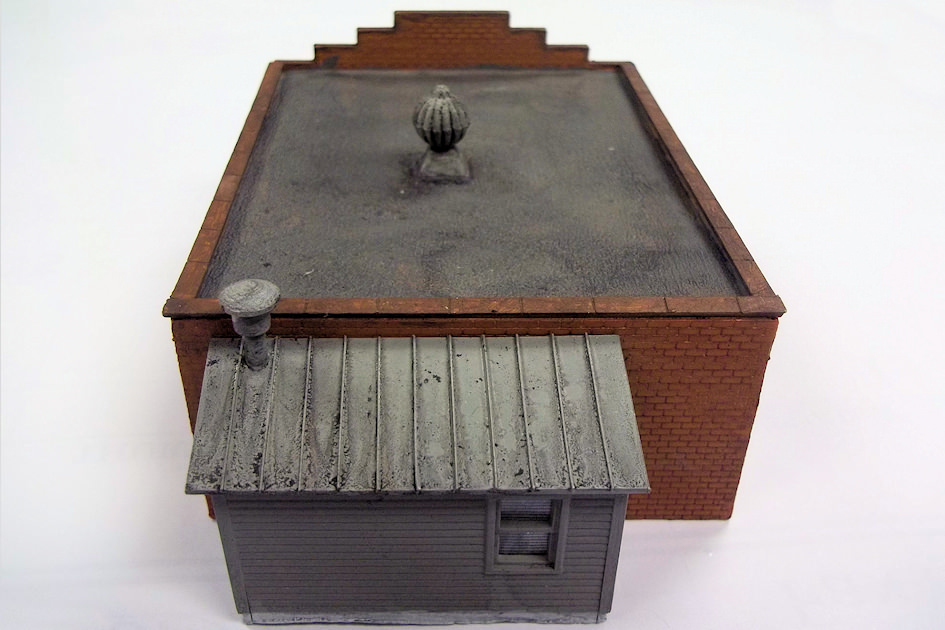 Now all I have to do is install my new establishments and my layout’s population can enjoy dinner and a movie.