photos by the author unless noted

I recently finished three Southeastern-prototype box cars for railroads represented by the ACL & SAL Historical Society—the Georgia Railroad, the Atlanta and West Point Railroad, and the Western Railway of Alabama. These railroads were occasionally referred to as “the Georgia Roads” although they each maintained separate corporate identities until the carriers were merged into the Seaboard Coast Line in 1967. Cars like these from the Georgia Roads could be seen regularly moving freight on the Atlantic Coast Line and Seaboard Railroads as well as all over the United States into the 1970s.

The model is Sunshine Models HO scale kit #29.4 initially released in 1994. The sides, ends, and underframe were assembled per the kit instructions, but I used the roof from an Intermountain 1937 ARA box car instead because I had an Intermountain roof on hand with a Kadee Apex running board installed. I further modified the car by using a Kadee Apex brake wheel and a brake step cut from Plano #202 brass Apex running board material, plus I added brake gear components from the Cal Scale #283 brake gear set. I painted the car with Scalecoat Box Car Red, then masked the sides and painted the rest of the car with Testors Gloss Black. I used the new Speedwitch D113 (“Atlanta & West Point and Western Railway of Alabama 1937 AAR Box Car and A&WP, W of A, and Georgia Railroad War Emergency Box Car Decals”) to letter the car. This is an excellent decal set—I highly recommend it.

Photo 2. The completed model prior to painting.

To weather the car, I applied a light wash of thinner and artist’s oil flat black to the sides and ends of the car to weather the area between the wood planks and other details. I used Bragdon’s powders to weather the roof (brown and black), and then highlighted the car with various shades of tan and light brown. If I applied too much weathering I would gently rub the area with steel wool. For certain applications, like weathering the roof, I mixed Bragdon’s Powers with paint thinner to apply the powders evenly and thoroughly. Before sealing the model with Testors Dullcote, I painted some of the sheathing randomly with different shades of brown I had available on my paint desk, including Scalecoat PRR Freight Car Color, Testors/Floquil Freight Car Red and Light Freight Car Red. This technique provides a prototypical contrast between the sheathing boards on the car, and also differentiates the model from steel-sided cars.

Incidentally, Intermountain is releasing an HO scale injection-molded War Emergency box car shortly. If you’re having difficulty obtaining the Sunshine kit, use Intermountain #41070, which can be found on the Intermountain website at http://www.imrcmodels.com/newshocomingsoon.html.

Atlanta and West Point Railroad took delivery of two series of 1937 ARA box cars beginning in 1941. The first series was delivered by Pullman-Standard’s Bessemer, Alabama plant in December, 1941. The cars, constructed under P-S Lot 5685, included only 40 cars. The cars were numbered 37300 – 37339. They were equipped with Miner brake wheels, Apex Tri-Lok running boards, and ARA trucks, and were constructed with the W-corner post arrangement. The cars were painted an attractive aluminum and black paint scheme.

I built my HO scale model of A&WP 37508 based on a photo obtained from Bob Liljestrand of Bob’s Photos at Cocoa Beach 2009 RPM meet. I started with an Intermountain #40799 Undecorated 1937 ARA box car. I constructed the car and added several additional detail parts, including A-line steps and grab irons from the Red Caboose PRR X29 kit. On the B end of the car, I installed a Kadee Apex brake wheel, wire grab irons, a handmade uncoupling device, and Kadee #58 couplers. I mounted a Kadee Apex running board on the roof. I had a spare set of Proto 2000 Spring Plankless trucks with Reboxx #1-1-1.015 semi-scale wheelsets on hand so I installed them, although the prototype car used ARA trucks. I wanted to use Intermountain ARA trucks because I think they best represent the prototype, but I did not have the correct semi-scale wheel sets on hand for them. I did not upgrade the brake gear, but plan to do so at a later date using the Cal Scale #293 set.

The completed car before painting.

I painted the sides of the car with Scalecoat Box Car Red and painted the roof, ends, underframe and trucks Testors Gloss Black. When the paint was dry, I decaled the car using a variety of decals from a number of different manufacturers. The reporting marks are hand-laid using the Microscale Railroad Roman white lettering set. The weight and dimensional data are from the Speedwitch D-100 Southern Railway AAR Box Car set, and the West Point Route monogram is from Kurt Fortenberry’s SE-4 Western Railway of Alabama PS-1 box car set.

I weathered the car by streaking the rivet lines and top and bottom sills of the car with fat black and Burnt Sienna paint, then going over it with the original box car red. I did this numerous times over a few weeks to get the desired result. Occasionally during the process I would use fine steel wool to streak the weathering. I finished the weathering by applying a light coat of Testors Russian Earth Brown on the underside of the car, then highlighting the entire car with Testors Dark Tan. I then applied white route cards from Microscale and chalk marks using a white artist’s pencil per the prototype photo. I did not weather the car as it appears in the photo. 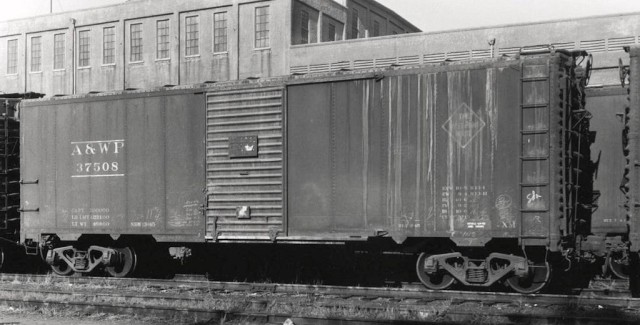 The third model is the Western Railway of Alabama 40-foot PS-1 box car. Western Railway of Alabama acquired two series of 40-foot PS-1s beginning in 1952. The first series of 110 cars, constructed by Pullman-Standard’s Bessemer, Alabama plant, were delivered in 1952 as part of P-S Lot 8021 (this lot was for a total of 160 total cars, and included 50 cars for the Georgia Railroad, series 39501-39550). They featured a six-foot Improved Youngstown door with high-mounted placard, Miner handbrake, Apex Tri-Lok running boards, and A3 trucks. The cars were numbered 18100-18209 and were painted freight car red. A second series of only 17 40-foot cars was delivered in 1956 with eight foot doors in a silver and black livery.

The model (photo 6) is the factory-finished Kadee HO scale box car, item #4304 with Kadee #5 couplers. The car was factory-painted red oxide with road number 18209. The only modifications I made to the car were the addition of Kadee ASF Ride-Control 50-ton trucks with Reboxx #33-2-1.015 semi-scale wheelsets (the “2” in the Reboxx item description stands for “double-insulated”, which are required for Kadee’s all-metal trucks).

Photo 6. The Kadee factory-painted model, weathered but prior to application of HO scale car cement to the roof. 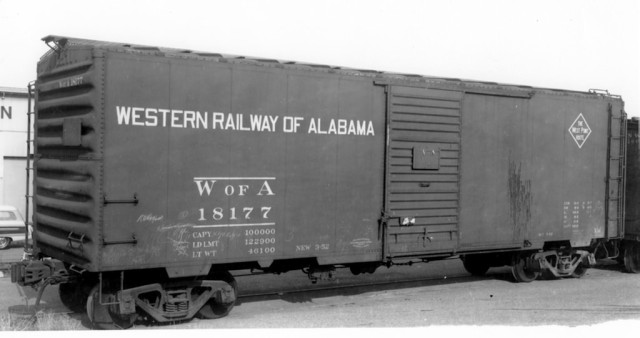 Photo 7. Western Railway of Alabama 18177 at San Francisco, December 1953. It didn’t take long for black car cement to begin peeling from the roof sheets. Note that the roof cement coating is already deteriorating off this car’s roof after just 21 months. Many cars lost virtually all of the roof cement coating after three or four years, leaving the black coating over the seam caps, which tended to adhere much better than to the galvanized steel roof panels. Photo by W.C. Whittaker, Ed Hawkins collection.

Study of the photo of WofA 18177 (see photo 7) raised some questions about the color of the roof. The car appears to have peeling paint, indicating the roof was finished with black car cement and not freight car red. I contacted freight car expert Ed Hawkins and asked him about the colors of the cars. Ed said “You’re on your own for the paint specs as I have not been able to locate them. According to P-S correspondence files at the Illinois Railway Museum, Lot 8039 for GA 39551-39660, A&WP 37900-37989, and L&N 5000-7199 had freight car red sides, ends, and underframes, black (car cement) roofs and trucks and white stencils. All of these cars had 8′-wide door openings. The 200 cars for A&WP and GA were built 11-52.”

Ed also commented, “During the early 1950s (say 1951 to about 1954), the standard PS-1 paint specification was for a black car with freight car red sides. Everything but the sides was coated with black car cement and the truck side frames received a “light-bodied” coat of black paint by the manufacturer. If a customer wanted ends that matched the sides, it was a deviation from the PS-1 specification and the customer normally had to pay extra for deviating. This is why so many PS-1s built in the early 1950s had black ends and roofs. Included was a small order of 40′ PS-1s for the Pennsylvania Railroad in early 1954 with cushion underframes. These were the only PRR box cars that ever received black ends as far as I can tell.”

Since I wanted to accurately model the prototype car as delivered, I made an educated decision based on photo evidence and Ed’s research and painted the roof of the model black. While the Kadee PS-1 box car remains a state-of-the-art model, the factory-painted versions are occasionally found to be in error. Kadee released PS-1 models of the other cars from Lot 8039 mentioned earlier (item #5106, A&WP RR 37989 and item #5107, Georgia RR 39639) and painted the entire models red oxide, without the car cement roofs per the prototype. Kadee also produced several series of early SAL PS-1s entirely painted box car red, but the prototypes were delivered with car cement (black) roofs. After masking and painting the roof with a mixture of Testors gloss and flat black paint, I weathered the car lightly with Testors Russian Earth Brown sprayed with an airbrush, and also brush-painted to highlight the car’s detail.

Photo 8. After upgrading the paint, the model matches the family appearance of the rest of its Georgia, A&WP and WofA brethren, with black roof and black (weathered) trucks.

Many thanks to Ed Hawkins, who generously provided information and comments for this article, Bob Liljestrand for allowing the use of photos from his collection, Larry Goolsby, Pat Wider, and Justin.

This article originally appeared in the Seaboard-Coast Line Modeler, Vol. 3, No. 2, 2nd Quarter 2009. The S-CL Modeler is the online modeling magazine of the Atlantic Coast Line and Seaboard Air Line Railroad Historical Society.