If any of you are like me, the recent cold weather has you daydreaming about springtime railfanning trips. Nice warm sunshine, beautiful scenery, and a good railroad adventure will certainly stir the soul. Let’s see now, what subjects sound good? Perhaps some mountain railroading? Maybe SD45Ts, some wide cab units. How about pushers. Now those ingredients would make up a great excursion wouldn’t they?

Well, the Southern Pacific comes to mind. The Cascades would certainly fit the bill, but with a trip to the National Convention in Madison who has the money or time? Let’s look a little bit closer. How about the Rio Grande mainline over Tennessee Pass. Sure it’s SP too (all too soon to be Union Pacific), but once again it has all the ingredients. Colorado is still pretty far away for a lot of us MCoR members, though. Have I got a suggestion for you! 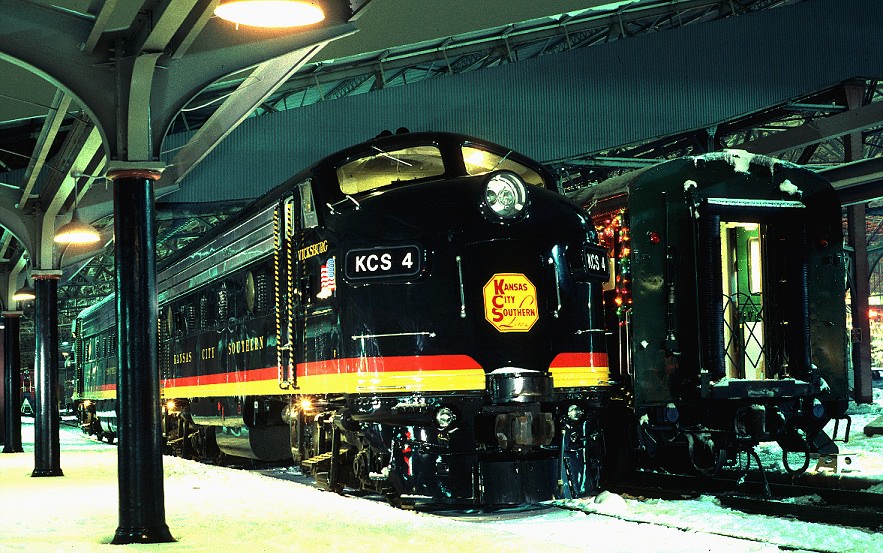 What about the Kansas City Southern! That’s right, the KCS is a great choice, close to home, easily accessible and lots of variety. Besides, it is one the way to the MCoR Convention in Little Rock. In this day and age, there are precious few class 1 railroads left, so you should visit this one while you have the opportunity. 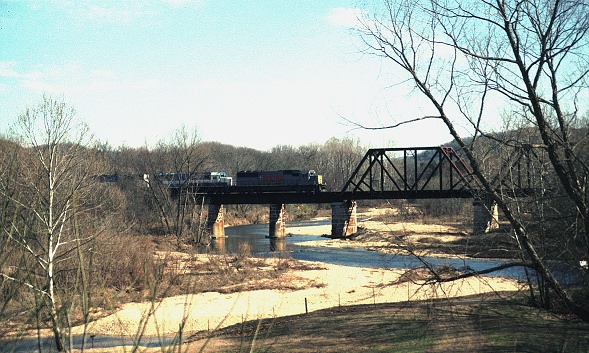 97 crossing a creek south of the Illinois River just north of Baron, Oklahoma.

There has been a lot of big news involving the KCS lately, and not all of it has been good. The motive power situation has been a bright spot though. The variety of “new” units is exciting with some recent new acquisitions. First came SD45T-2’s rebuilt by Morrision Knudson to “-3” standards. They sport they gray paint scheme hat superseded the popular white. The units also feature the resurrected “Kansas City Southern Lines” logo. I spotted these units at the Pittsburgh Kansas shops still in ESPEE paint last January and figured something was up. Next onto the property were some unique GP40-2LW’s. These units are ex-Canadian National and feature the wide nose styled comfort cabs so common on bigger units here in the states. The KCS trademark yellow safety striping can’t be overlooked on these. Don’t think that F-unit fans have been left out. 1995 brought four VIA RAIL FP9A’s resplendent in Southern Belle black, red and yellow to the railroad for business train service. The units are named for cities with KCS shop facilities: Vicksburg, Meridian, Shreveport, and Pittsburg. 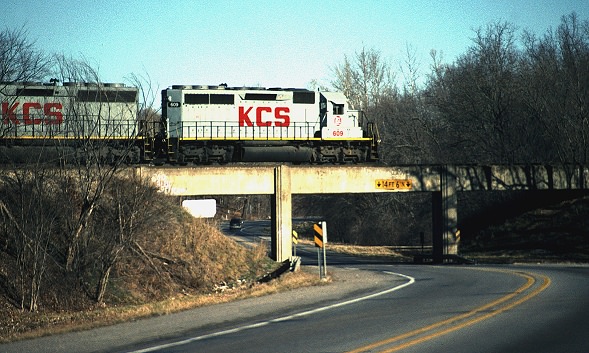 The latest KCS news isn’t really very good at all. Mike Haverty who runs the KCS after his very successful days at the Santa Fe, has failed in his every bid to make the railroad a major player in the ever bigger “big leagues”. First, he opposed the UP/SP and BN/SF mergers in hopes of winning trackage rights concessions to little avail. Next, he proposed and bid upon the purchase of the SOO Lines ex-Milwaukee Road trackage from Chicago to Kansas City in hopes of a strategic alliance with another welterweight – the Wisconsin Central. No luck again, the winner was the Montana Rail Link which will make another story for another time. So what will become of the KCS? Will it remain independent, only time will tell. While we wait for the outcome, let’s do some shootin’. 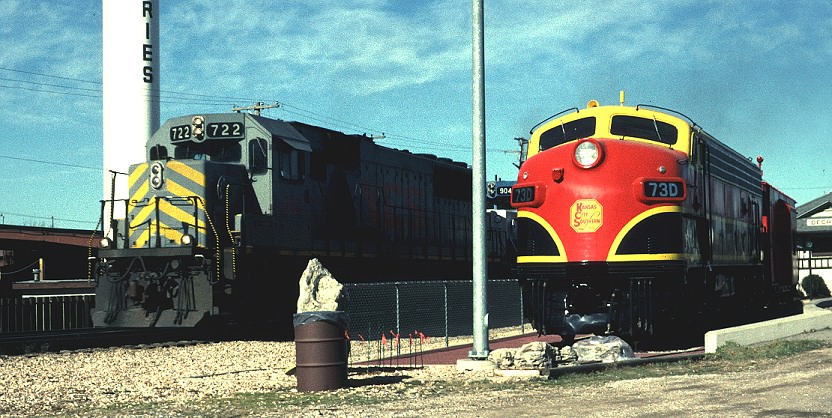 Tune the scanner in to 160.260 and 160.350 and head for southeastern Kansas and US Route 69. Pittsburg is home to an open train order office at the north end of the yard where you can often get lineups and crews have given me good information before. Trains stop just north of the crossing to change crews. The shops are at the south end of the yard and are easy to view from public roads. The South Eastern Kansas shortline runs a daily job with an MP15AC to their small yard west of the KCS and often interchanges. Before the photography begins, stock up with a good breakfast at Harry’s, right downtown. Then head southeast towards Joplin, Missouri, on Highway 171, but don’t miss the shot at the Spring Creek Bridge. The abandoned depot in Joplin is a great location to shoot passing trains, but don’t delay if you are chasing or you will fall too far behind to get to Neosho on Route 71 where the helpers are cut on. At Neosho, it is very easy to get confused with the BN mainline nearby, so stick with your train and listen to the radio.

Anderson, Missouri has a very nice depot to shoot and I suggest you get far enough ahead to definitely get a photo there. After Anderson, take 59 south to some unique spots such as the caboose at Gravette, Arkansas and the F-Unit in Decatur. By the way, in case your wife is mad about your being gone too much chasing trains, I saw some handpainted signs in the Arkansas Ozarks offering divorces for only $40! The countryside is beautiful, but the culture is “unique”. I would not suggest straying from the beated path any more than necessary – although leaving the beaten path is my specialty! The first set of southbound helpers generally comes off at Siloam Springs. 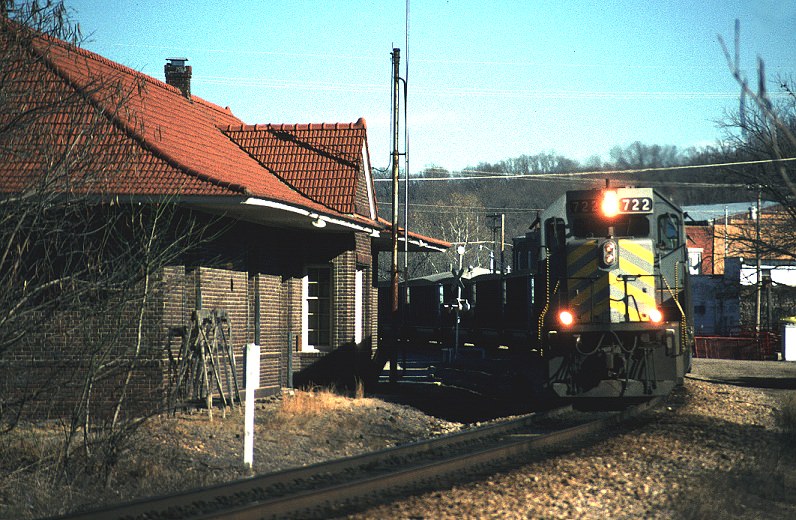 The winding roads in eastern Oklahoma and western Arkansas around Siloam Springs make it difficult to get ahead, but there are easy shots at Baron, Stillwell and Sallisaw. Another set of helpers will often go on coal trains at Heavener for the climb over Oklahoma’s Rich Mountain grade. The practical end of a chase from Pittsburg is Gans, Oklahoma, because the roads and railroad separate for too great a distance to stay with a train. If you want to shoot farther south, you must have some intelligence on another southbound an hour or so away.

You will generally encounter eight to ten road freights along with several coal trains and “Dodgers” or locals, especially around Pittsburg, in the average day. With the ease of chasing these numbers, it is easy to have great day on one of America’s last midsize class ones! By the way, head east from Gans to get to Little Rock!