Gateway to the West
Railroads and the St. Louis Riverfront

The St. Louis Riverfront has long been a gateway. If you go a long, long way back there were the canoes of “Pere” Marquette and his party who journeyed down the Mississippi. There were Native Americans before him who traveled up and down the Ohio and Missouri trading and making war. Following both there were Merriwether Lewis and George Rogers Clark. Today the Burlington Northern and Union Pacific join the names of the fur companies that traded on the levee 200 years ago: Rocky Mountain Fur and the American Fur Company. 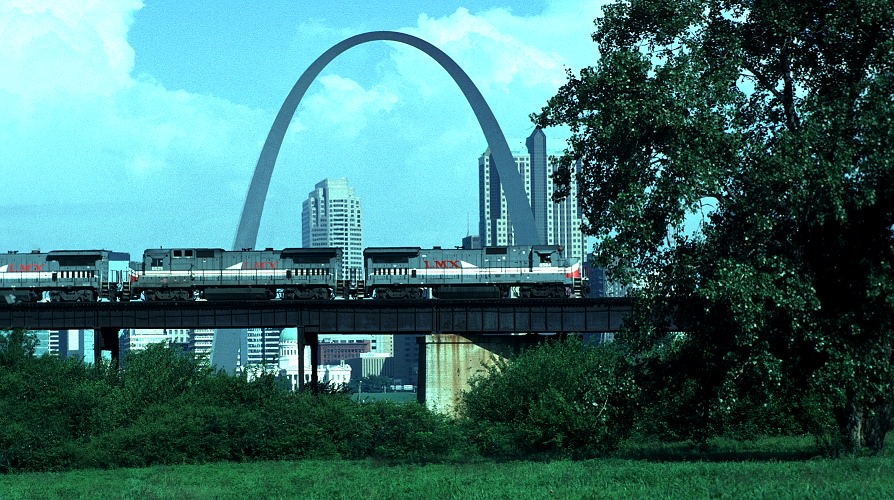 BN train with LMX Leasing GE units coming off the east approach to the MacArthur bridge on the Illinois side of the river.

October 28 was the 30 anniversary of the completion of the Gateway Arch commemorating America’s westward expansion, and that date inspired this issue’s article. With next summer’s MCOR regional meet in St. Louis, a visit to one of the area’s premier railfanning locations seemed appropriate. To understand the Riverfront you must know something of the history of the Gateway to the West. It was in 1764 that Pierre LaClede and Auguste Choteau set up the first trading post on the Mississippi river that was to become St. Louis – named in honor of King Louis IX of France. Expeditions of exploration, trade and war headed west from the spot just south of the union of the Missouri to the Mississippi river. The most famous journey being that of Lewis and Clark in 1804. In later years 49ers, homesteaders and settlers began many a journey here for the trails that led them west. Where steamboats lined the cobblestone levee (still in place), railroads gradually made inroads after the construction of the Eads cast iron arch bridge. Eventually technology progressed from canoes to flatboats to steamboats to SD70MAC’s.

The Jefferson Expansion Memorial was first conceived in a different form in 1931 by Luther Ely Smith who had been tapped by President Coolidge to find a site for a George Rogers Clark memorial. Smith approached St. Louis mayor Bernard F. Dickman in 1933, and by 1941 a design had been chosen. The Arch was designed by Eero Saarinen who won the competition. Construction was started in 1961 and completed four years later. Today the Arch, our tallest National Monument, soars 630 feet above the spot where Manuel Lisa counted beaver pelts. What a backdrop for modern railroad action! It plays host to 2½ million people annually many of whom choose to ride to the top in a train (of sorts). The underground museum and theater chronicle our nation’s westward expansion – hence the official name. When you visit don’t ignore the Arch itself in quest of trains! 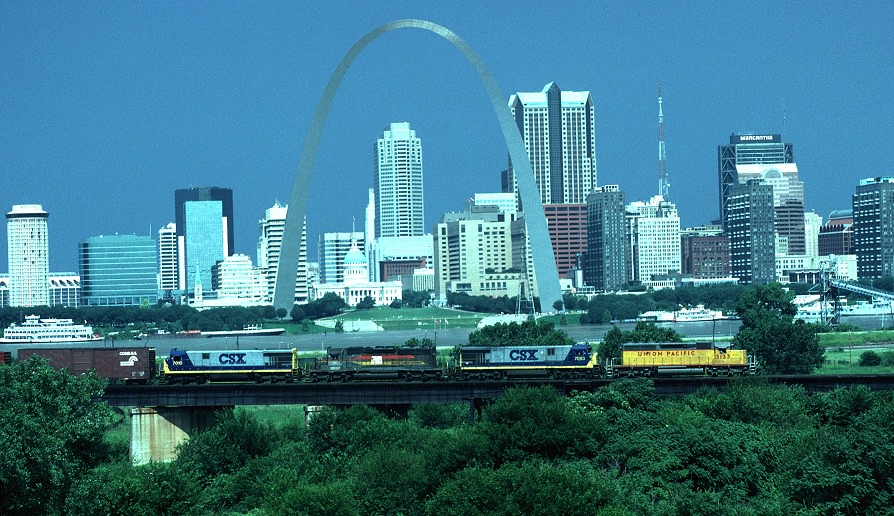 Union Pacific Train KCCH (Kansas City – Chicago). This is a train rerouted from in front of the Arch due to the highest water in recorded history in St. Louis during the “Great Flood of 1993”. Taken on August 1, 1993, after spending all night long sandbagging the River DesPere in south St. Louis, this was the actual high water mark!

St. Louis’ Terminal Railroad Association (TRRA) has operated the tracks along the Riverfront since they were first laid in 1885. Originally they were on a cast iron viaduct, portions of which still exist north of Eads bridge in the entertainment district known as Laclede’s Landing. There are many good restaurants there to dine before or after shooting, and some excellent scenes with the stone and iron Eads bridge in the background. There is also a Metrolink station at Laclede’s Landing. One can ride across the Eads bridge on the Metrolink today and go through the tunnel under the city to emerge on the south side of downtown. For many years passenger trains coming into or leaving St. Louis from the east took this route to Union Station. Now all Amtrak trains run through the two tunnels between the Arch and the river.

While the trackage is TRRA, you will see several different trains passing below the Arch. There is a great deal of BN traffic from their north St. Louis yard to the ex-Frisco yard at Lindenwood. The Chicago-bound Amtrak trains all travel along the Riverfront before crossing the Mississippi on the Merchants Bridge, and you will spy NS traffic to and from Luther yard as well. TRRA’s red switchers are relatively infrequent visitors. Union Pacific trains coming from Chicago also travel this route.

If you chose to use the Arch as a less oppressive backdrop, the locations are almost too numerous to mention as is the variety of trains. From the east side of the river you can photograph CSX, SP, SSW, Gateway Western (with their Arch logo), Alton & Southern (St. Louis’ other switching railroad), C&NW, Conrail and Metrolink. A wonderful photo of downtown and Metrolink trains is available from the road leading to the Casino Queen riverboat on the East. St. Louis Riverfront. While many of these east side of the river locations are very desirable to photograph, some are in decidedly unsavory areas – so I recommend the south side of downtown on the Missouri side of the river as the best spot for railfan visitors to the city. 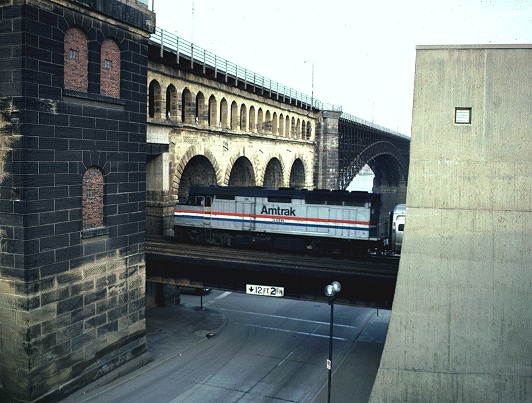 Northbound Amtrak train “Ann Rutledge” under the Eads Bridge on the Missouri side of the river north of the Arch.

A perfect location exists on the abandoned approach to the MacArthur bridge just south of Busch Stadium. The bridge, named for the TRRA president not the United States president, is closed to auto traffic but carries the lion’s share of trains across the river now. The entrance ramps are now parking for the world headquarters of Ralston Purina and are easily accessible. In the foreground you will find Gratiot Tower – the busiest in the metro area. Here you will see almost all trains that go beneath the Arch, plus all the east-west traffic over the MacArthur bridge. You may also see one of Anheuser-Busch’s Manufacturers Railway transfers with their beautiful green, gold and white locos!

You may want to move further west, past the 200 year old residences of Compton Heights and Lafayette Park, down Choteau Avenue and view traffic from one of several road bridges that cross the Mill Creek Valley. The Mill Creek has long since disappeared but the 23rd street yards of the Union Pacific that run east-west still follow its course. Here there are some great opportunities to photograph trains, especially in the evening light with the Arch once again as a dramatic focal point. You can also get the renovated Union Station shopping complex and the Edison Brothers Beaux Arts painted warehouse in your photos. 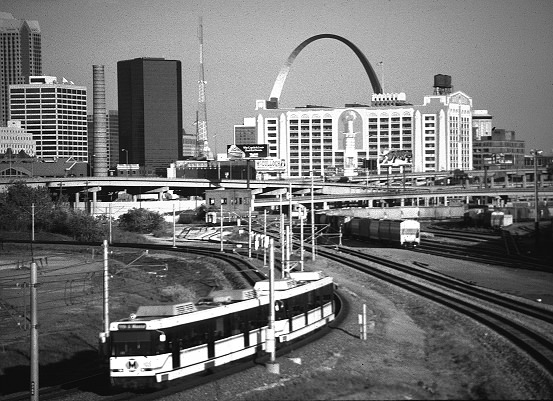 Westbound Metrolink train with the Edison Brothers Warehouse in the background taken from Mill Creek Valley. Lots of UP and BN traffic along with Amtrak here at the 23rd Street yards.

I have always aspired to give my railroad photos a “signature” that will make them interesting to anyone who may see them. Perhaps the character of the railroad can be captured, such as the windswept high plains of Sherman Hill, Wyoming with a UP train, or Conrail on Horseshoe Curve as two extreme examples. There is no better “signature” for photos taken in St. Louis than the Gateway Arch. It will identify your shot’s location to millions around the world, even if the significance of its history is lost on them. You know there are some days that I have been waiting for a BN train along the cast iron viaduct north of the Arch, among the old fur warehouses of Laclede’s Landing, that I can almost hear the steamboat whistles and hustle and bustle of the old days on the cobblestone levee!