Tom Troughton, MMR
by
Comments are off 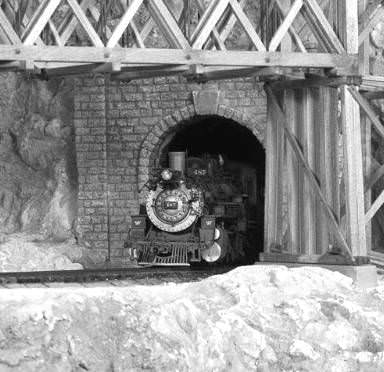 How many times have you entered a fellow model railroader’s train room to be awe struck at the magnificent layout before your eyes. There’re several hundred feet of meticulously constructed hand laid track, on tie plates even, track side signals changing colors when trains roll past and sound effects coming from every nook and cranny.

The model builder tells you that the layout represents the “ABC” railroad as it existed on July 9, 1947, and contains several scratch-built models of engines, cars and structures. They look great also, running through rolling countryside, deep mountain canyons and across spindly wooden trestles.

Then you happen to spy a train about to roll into view from one of the hand-carved tunnel portals dotting the layout. The headlight comes into view and the train exits, moving on to points west. However, your eye catches a glimpse of something else in the tunnel.

First you see a couple of red and black wires. Then there’s the familiar green colored form of a Tortoise switch machine. Further into the tunnel you see a couple of wooden braces, probably made from an old pallet picked up at a warehouse loading dock. Finally there are the risers supporting the hand-laid with code 40 weathered rail branch line. The impression of a super model railroad layout just went down the drain.

The real world scene inside the tunnel is one thing I didn’t want to be seen on my Cimarron and Tall Timber RR. I realized that when I switched to Sn3 scale a couple of years ago. The new scale allowed me to operate engines equipped with lighting and sound systems and I wanted to create realistic situations on my new layout. I wanted to see the headlight beam bouncing off the side walls and to hear the sound of the chugging engine diminish when it entered a tunnel and increase as it exited.

Lining model railroad tunnels is a relatively easy thing to accomplish. You can make your own liners with a plastic mold made by Woodland Scenics. They offer a curved top tunnel liner for single or double HO track. I purchased one at a railroad meet and poured my first casting the next day. Two castings are needed to make a complete lining. Taping the two together with duct tape, I placed the arch over my track and measured the clearances with the Sn3 NMRA Clearance Gauge. The gauge just fit inside the opening, only touching a bit at the top center. I merely removed some of the plaster with a Stanley Surform tool to clear my Sn3 equipment.

I made several castings from dental plaster, my main scenery material. When I’m casting liners, I don’t get much layout work accomplished because I’m always going back to my workshop, checking the castings and pouring another as soon as one is finished. When a casting was removed from the mold, I used the Surform tool to smooth the edges, remove some from top center and knock off any flash. They were taken outside and placed on an old window screen supported across a couple of bricks. The screen allows air to circulate completely around the castings so they dry quicker.

Before installing them on the layout, I sprayed the tunnel sides with Krylon gray paint, then did a hit and miss spraying with black, to suggest smoke and soot from the engine exhaust. This proved to be a mistake as it made the interior of the tunnels too dark. Under realistic conditions, they would probably be covered with soot, but the dark color reduced the effect I was hoping for with the layout. To correct the problem, I will dry brush some white paint on the linings to lighten them up a bit.

Installing the Woodland Scenics linings on the layout is fairly easy and since the tunnels didn’t need to be lined beyond what could be seen through the portal, I didn’t have to line the full length.

I used Homosote for a roadbed for all my track. It was cut 2 3/4″ wide. There’s about a half inch of subroadbed material extending out beyond the roadbed for the linings to rest upon. I held them in place, one at a time, drilled pilot holes through the plaster, and inserted 3 penny finishing nails through the holes into the Homosote. When the track curves, I’ve used the Surform tool to taper the top portion of the liner side to curve with the track. I used duct tape to hold the tops of the castings together. If I ever have to work on the track in a section that’s covered with the tunnel castings, all I need to do is untape the pieces, pry out the nails and remove the castings.

I wanted to make my own liners for a few situations where the double track feature of the Woodland Scenics mold wouldn’t work for me, since it was designed for HO scale. I had a neat rubber mold of a fairly straight piece of rock. I made a casting of it and carved out a 4″ x 5 1/2″ piece. I smoothed the surface irregularities from the castings to make it flatter, since the men boring the tunnels in real life would have knocked or blasted them off anyway. When I was happy with the casting, I made an RTV mold of it.

These castings are rectangular in shape and don’t offer any ceiling effect. I used them differently than the curved topped liners. These flat liners are supported on untempered Masonite that I ripped to width on my shop saw and fastened to the layout with sheet rock screws. The liners are secured to the Masonite with Liquid Nails.

I discovered that I had to add small strips of the Masonite to widen my subroadbed, especially on the curves, because the cab roof overhang from the K-36 and K- 37 engines I run hit the lining.

Since the tunnels will have portals, I didn’t try to hide the tops of them with rock faced castings. I merely put a piece of heavy cardboard across the tops of the castings. The tunnels are as dark as a tomb when viewed through the portal.

It took me about a month of pouring, coloring and gluing to install liners to my tunnels on the scenic portion of the layout. I’ve got about another fifteen feet of liners to pour and install, but I’m not in too big of a rush to complete them yet.

The liners are a nice visual effect to the layout. They also help the sound because when an engine enters one of the lined bores, the sound drops realistically, as in real life. It’s also a nice effect to look through one of the portals and see the light from the engine bouncing off the side walls as it approaches and blasts into the open.

Liners are cheap and easy to make and add that bit or realism missing from model railroad layouts across the land. Give them a try. I think you’ll like them.