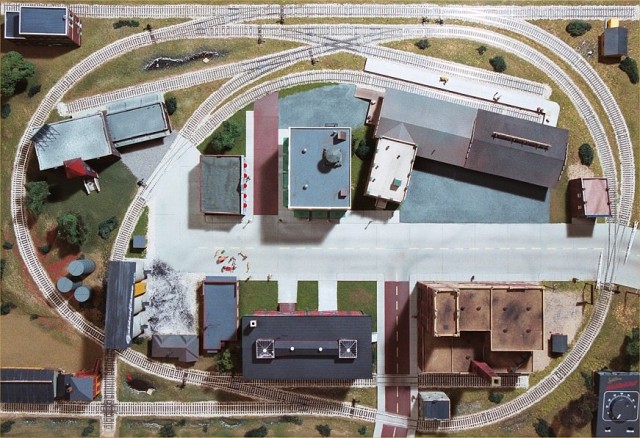 Overhead view showing the location of the major structures.

This track plan combines a continuous run loop with the capability for true model railroad operations and switching action.

The large buildings divide the layout into separate scenes without the need for a scenic divider. The facing and trailing point sidings, and three crossings, give a “big time railroading” feel in only 4’x6′. As you follow the train around the loop in these four photos, you’ll see how the structures and trackwork arrangement help create and reinforce a number of small scenes. 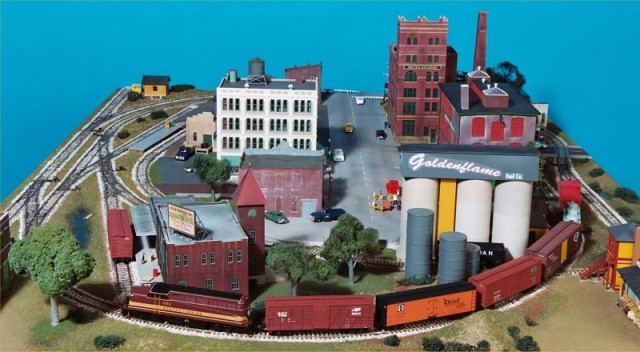 The large buildings in the middle divide the layout into separate scenes.

The “railroad avenue” side of the layout features a large REA freight house (with inbound and outbound tracks) at left, a fuel company (right rear) that is switched from this side of the layout, and two industries with separate tracks at right and right front.

The “railroad avenue” side of the layout.

The four-lane street enters the layout from this end. The street system is a major structure in itself, made of street, curb, sidewalks and accessories (including streetlamps, telephone poles, fire hydrants, mailboxes, and manhole covers). Light weathering of the traffic lanes, and the yellow centerline, are important in creating a realistic street.

The four-lane main street enters the layout from this end.

The “industry row” side of the layout has three industries to switch, a lumber yard (at left), a large warehouse (center) and an intricate brewery complex (right). The brick street crossing and railroad crossing make this scene appear larger by dividing it into separate areas.

The “industry row” side of the layout.

The Kraichely Building anchors the center of “industry row.” It’s set back from the street with a well-maintained lawn. 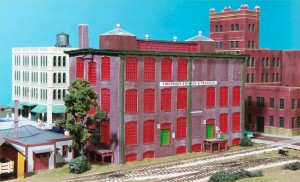 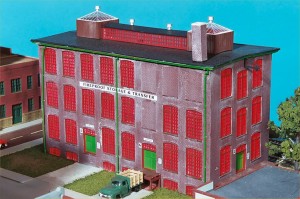 The tall buildings separate this switching area from the rest of the layout. And the brick street, with one tiny building set between the tracks, further separates this side into two mini-scenes as well. The brick side streets provide contrast to the concrete main street. 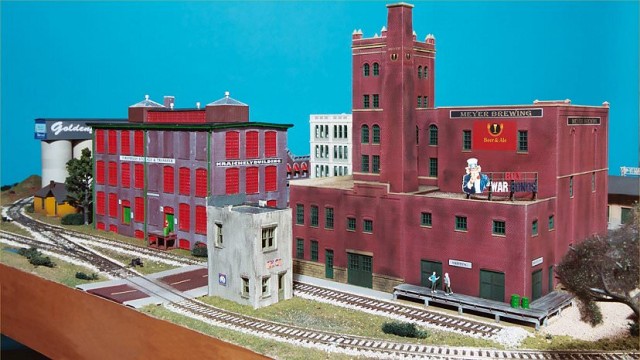 The tall buildings separate this switching area from the rest of the layout.

The street system is a major project in its own right and needs to be assembled and installed before the buildings, but with the exact location of the buildings completely planned. Note the airbrushed weathering on the streets and the center line. The Meyer Brewing complex has many visually interesting angles and details, but we couldn’t resist adding this intricate sign as a “finishing touch.” 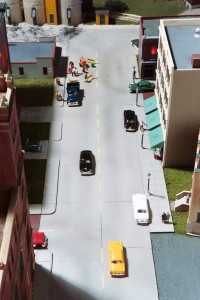 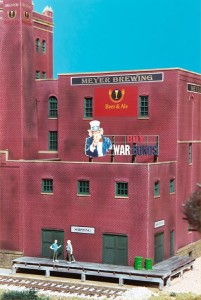 The lumber yard is the final industry on this side. The railroad tower operator watches over the two crossings. Note the ditch carved into the foam next to the track. It must have rained recently as (Envirotex epoxy) “water” is still in the ditch. 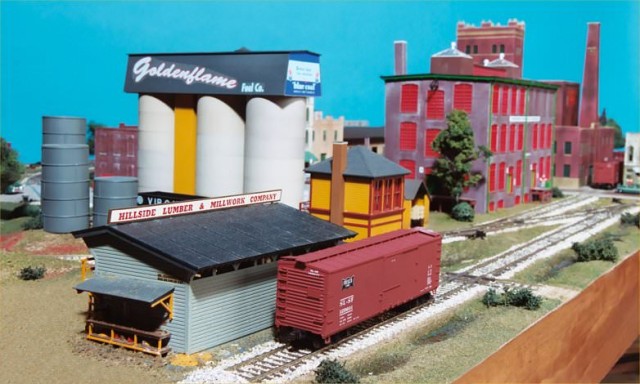 The lumber yard is the final industry on this side.

See the individual buildings and structures on this model railroad. 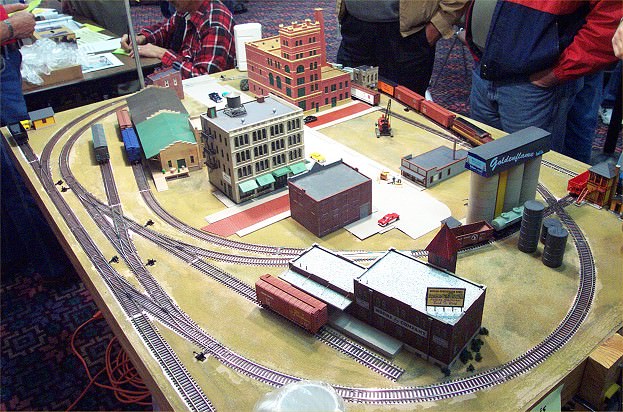 An early photo of the layout still under construction being displayed at a train show.