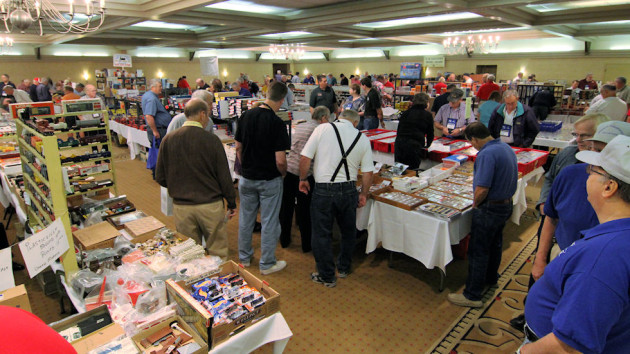 The NMRA Mid-Continent Regional convention returned to St. Louis, the “Gateway” city, after an eight-year absence. The Gateway Division broke with tradition and started the convention a day early on Wednesday May 30 – which allowed us to pack the convention full of more activities – giving better value and a more exciting convention. Notable model railroaders, including Tony Koester, Bill Darnaby and Mont Switzer, presented clinics. Over forty quality layouts were available for viewing and interesting prototype/industry tours were available. Prototypical operating sessions (OpSIG) were available and space was included for Special Interest Groups (SIG): Operations (OpSIG), Layout Design (LDSIG) and Railroad Prototype Modelers (RPM), so that you could meet with them and discuss their group’s activities.

Wednesday, May 30, the convention started with registration at the Holiday Inn Southwest Convention Center. The Hotel, Convention and Train Show were all under one roof and provided excellent access to the St. Louis highway system and attractions. OpSIG prototypical operating sessions started Wednesday night.

Thursday, May 31, the convention was in full swing with a bus tour to Gateway Rail Services in Madison, Illinois, where passenger cars are repaired and refurbished; and notable model railroaders presented sixteen clinics. The Model Contest room was open to accept models for NMRA Judging, People’s Choice and/or Display. The day featured self-guided tours of over forty layouts and another evening prototypical operating session.

Saturday, June 2, a tour of American Model Builders was available. There were also eight clinics; model contest judging; even more layout tours, and the Train Show opened. In the evening, the dinner banquet was held at an unusual venue, the Museum Of Transportation, with dining under the train shed among the old passenger cars. The diners were entertained by the passing trains on the busy Union Pacific mainline next to the Museum. Tony Koester was the keynote speaker, and service and contest awards were given.

Clinics: The twenty-three clinic topics were balanced between planning, operations and building…something for everyone.