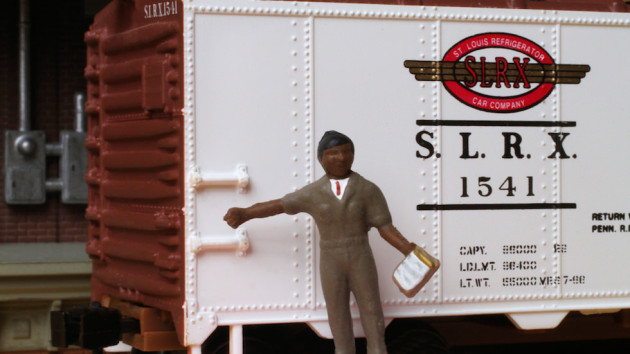 “The little people employed in yard. train and engine service on these pikes are being injured when they appear to reach for a handgrab expecting it to be real wire and find out too late that it’s solid plastic.” a spokesperson explained. This effectively removes a lot of kit-built and “RTR” rolling stock placed in service before about 1999, and even a large swath of cars supplied more recently. Smaller scales and the more marginal pikes in all scales will be disproportionately affected and it might not even be practical for them to retrofit existing rolling stock with wire handgrabs. Owner/operators have only until 12:01 AM July 1, 2013, to comply.

“What are we supposed to do?” quipped the General Manager of a well-known N-scale road, “file for abandonment? The minute we do that, the right-of-way will revert to other uses such as washers and driers; you’d never get it back.”

Asked how the ban might affect cars that were furnished with owner-applied hardware and/or may have no handgrabs at all, the spokesperson explained: “Despite some vague anecdotal evidence that the process of applying wire handgrabs leads to psychiatric illness in some people especially in HO scale and smaller we simply cannot allow this to stand in the way of safety. Properly secured owner-applied hardware is acceptable. But we will be going after the scofflaws that are not making any attempt to apply them even in Z-scale.”

He went on to explain that some figures in the scale railway industry had been caught beneath the wheels of passing trains after losing their grip on a solid plastic handgrab and had suffered scrapes, scarring, and in some instances involving the larger scales even visible indentations that could only be addressed with topical treatments and that in most such cases an actual cure was impossible. In at least one known case, a mishap resulted in a fall about four feet to a concrete slab. The victim was immobile and had to be scraped up with a file card.

Wm. K. Walthers and other firms will be ordered to provide lists of customers who the firm had supplied with rolling stock that was furnished with user-applied hardware items as a kit. Effective immediately, pikes will have to submit paperwork documenting application of wire handgrabs on every car placed in service.

“We run our pike on our own time.” quipped another owner. “We don’t have a staff that can deal with these new regulations. And during the summer, a wheel might not turn for weeks at a time.”

Frodo Proto, a Walthers spokesman, was more sanguine: “Look, everyone knew this was coming. That’s why we recently announced that all our cars would have factory-applied wire handgrabs going forward.”

One reporter, noting that many of these workers appear to have a condition not unlike rigor mortis and cannot visibly bend their hands or arms without assistance in the first place, was greeted with the retort that the law requires that little people with disabilities including chronic severe plasticized systemic stiffness (CSPSS) had a right to work just like other little people, even if they had no visible signs of any active organic functions. “The minute we start making exceptions, people will stop taking us seriously,” the spokesperson said.

from the NKP Yahoo Forum http://finance.groups.yahoo.com/group/NKP/message/23087