Don’s HO layout, set in 1949, utilizes a 17’x22′ folded dog bone design to capture the beautiful mountains and scenic route east of San Bernardino. Starting in San Bernardino, the railroad begins the long climb to Cajon Pass, Sullivan’s curve, Summit, and ends when we reach Victorville, California. The scenery on this route is breathtaking, making it easy to understand why millions of photos have been taken by railfans in an attempt to capture the beauty of the mountains and the awesome power of a railroad working to overcome nature.

Engine #3869, a powerful 2-10-2, works hard to assist a set of blue, cream and red ATSF diesels. Steam is in its final days and is serving out the remaining time helping the new diesel power. A passing four-unit set of warbonnet diesels provides further evidence of the coming changes.

Don’s ATSF Division features very impressive car and engine facilities including a three track icing platform. The icing platform works to return empty reefers from the east to the short lines so the cycle of delivering fresh fruits and vegetables from California to the Midwest and East Coast can begin again. A number of short line railroads play a key role in this movement of food products. An ATSF local brings the empty reefers to the large icing platform for preparation. Several short line railroads load the cleaned, pre-cooled reefers with produce and are returned to the icing platform. A final stop here for ice is imperative to insure the freshness of the fruits and vegetables before leaving for points east. The layout uses a Digitrax Digital Command Control system for the flexibility if offers in performing the many required train moves.

A short distance away from the icing platform is the roundhouse. Look inside and see prototype painting on the support columns and service pits in the floor. Outside is the turntable and bridge which has been kitbashed to represent the actual prototype. 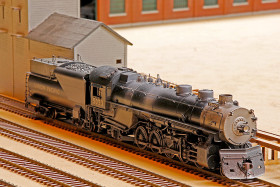 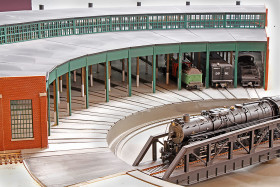 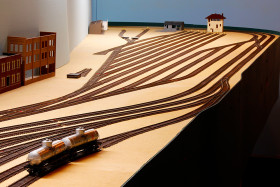 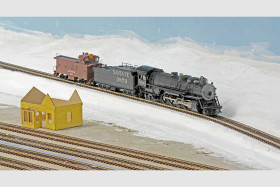 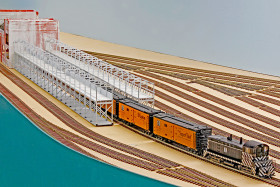 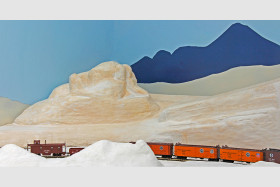 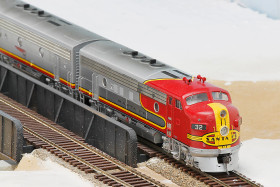 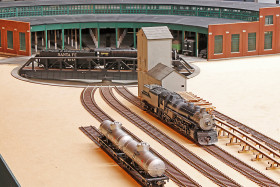 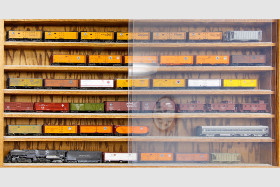 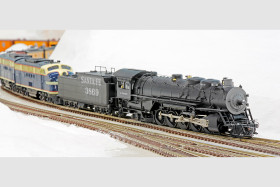 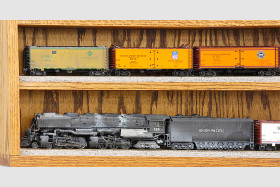 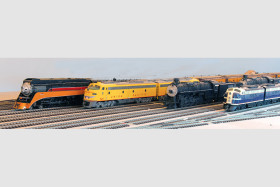 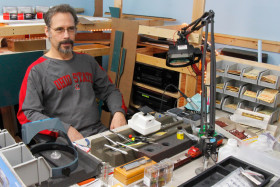