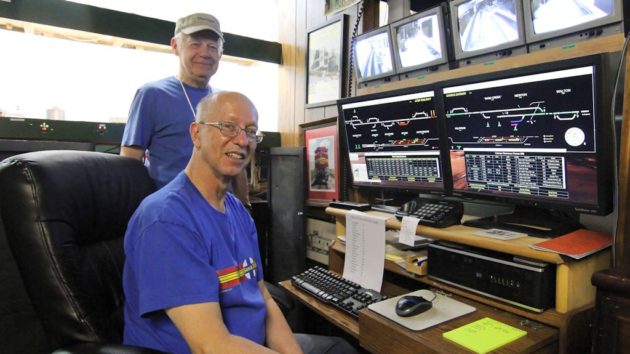 By Jason Janzen and Dale DeWitt, Photo by Richard Schumacher

Special operations were conducted Saturday night, April 30, 2016 on the Kansas Division of the AT&SF. The report from the front office would indicate that all trains operated “in the black.” The Safety Department reported no injuries to any personnel and the Maintenance Department likewise reported no incidents. This is all very commendable as all operations for the night were conducted with new hires! In honor of a job well done, their names are listed: Gary Gross, John Schindler, Hank Kraichely, Tim Stout, Alexander Schumacher, Richard Schumacher, Rob Kurtz, Jim Lynch, and Ron Schlueter. Operations Superintendent Janzen said he considered the night a success as all personnel said they would “chalk up” again sometime.

I was fortunate to be able to attend the Gateway operating session at Brain Post’s Sierra Nevada & Indian River Railway on Saturday, April 30th. It appeared to have a full crew of railroaders there enjoying themselves and learning the tricks and idiosyncrasies of the layout while the weather was stormy outside. I only knew one other person there other than Brian, so it was helpful that he had name tags for all of us. It was evident that a few of the participants were familiar with the layout’s operations while a number of us were newbies and needed all the help we could get from those more experienced. I found the whole crew to be having a good time and helping each other. The layout operated well except for those pesky light weight shorty cabooses that tended to become uncoupled when they passed over a track magnet. After a while we learned to keep tension on the couplers when near a magnet. Brian was the ever congenial host guiding us as needed and keeping the snacks flowing. At 10 p.m. operations were still in full swing when I needed to leave. Best of all I got to meet some new friends. Thanks Brian.