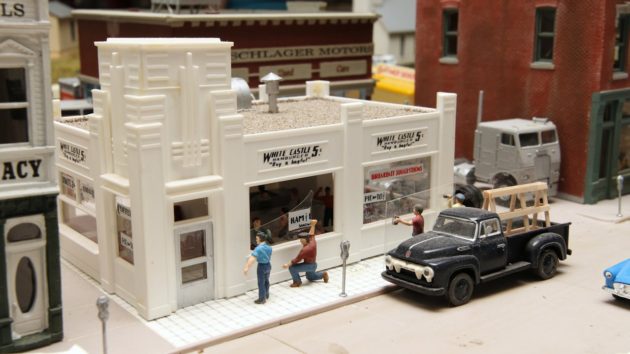 Gregor Moe’s Salt Creek and Western/Chicago Great Western HO scale model railroad is filled with hundreds of beautiful structures and miniature scenes. Unfortunately, he accidently broke the window in his Dubuque White Castle while handling the model. Instead of just replacing the glass, Gregor had another idea.

Gregor extensively uses the Woodland Scenics Scenic Accents figure, and AutoScenes vehicle, sets on his layout. Each set tells a story, and forms an interesting small scene. There are also themed Preiser figure sets of workers, shoppers, and travelers. Gregor decided to add a new scene with his HO figures repairing the broken window, created with a pickup truck modified to carry glass sheets and an installation crew. The broken window doesn’t seem to bother the diners inside at all.