“Model Railroading 101” Class at the Museum of Transportation

Don Ayres
by
Comments are off

On December 16, 2017 the Gateway Division hosted their first “Model Railroading 101” class open to the public at the Museum of Transportation. We advertised our event at train shows, hobby shops, on the web, and at the month-long E. Desmond Lee Holiday Train Display at the museum. Since our target audience was school age kids, we planned a “train set” giveaway with the event. We certainly also hoped to recruit the parents or grandparents who brought them into the hobby, and perhaps even an NMRA membership! The Division’s switching layout and Jim Ables’ portable N scale layout were on display.

The demonstration of how to build a simple layout began at 10:00 a.m. with our instructor, Greg Gramlich, hot-melt gluing the Bachmann EZ-Track to a 42” by 60” piece of 2″ thick extruded foam. (This worked very well and the cooling time on the glue wasn’t a problem.) The foam board had been painted about a week earlier with one coat of earth brown latex paint as a scenery base color. Scenery construction continued at the Museum with the application of a thin layer of white glue to selected areas to adhere grass and gravel ground covers. The youngsters in the group really enjoyed helping spread the glue and applying the materials! Next, two Plasticville structures were quickly assembled. Another crowd favorite at the event was Woodland Scenics tree construction by all the members of the audience. Using pre-twisted trunks, Greg showed the audience how to fill in the branches using black poly-fiber. Then, hair spray and flocking was applied, and the trees planted. The first run of a train completed the layout.

A drawing was held to choose the winner of the layout and the train set. A grade-schooler named Adrian won. When Adrian was asked how old he was, he replied “About 10.” His mom said he was more like 6!! Adrian was thrilled to have won the layout, and so were his parents. 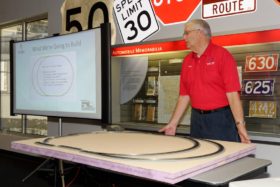 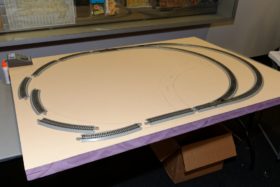 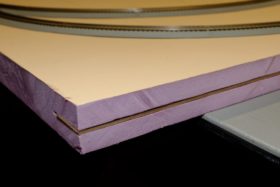 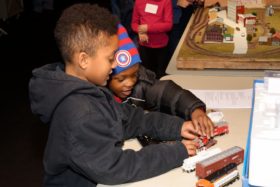 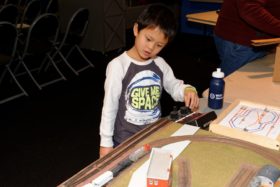 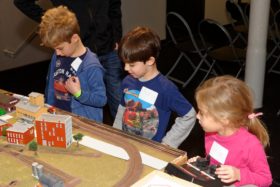 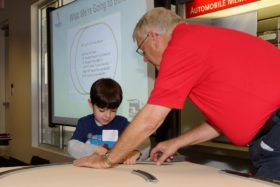 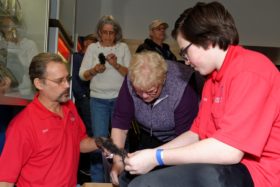 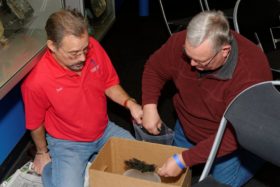 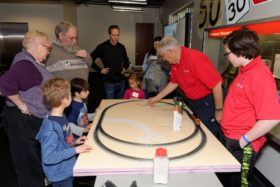 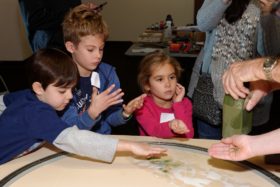 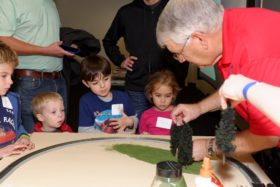 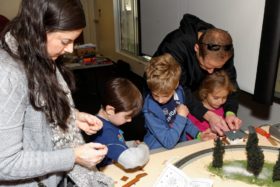 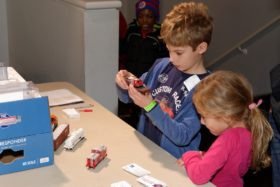 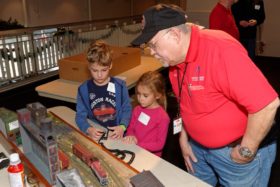