If you are planning on visiting St. Louis for the 1996 Mid-Continent Regional Convention, don’t forget to bring your camera! With a minimal investment of several hours time, you can reap many rewards in the Gateway City. Come on along and let me be your guide for a tour of four great locations, all easily, safely and quickly accessible from the Convention Center in Collinsville. 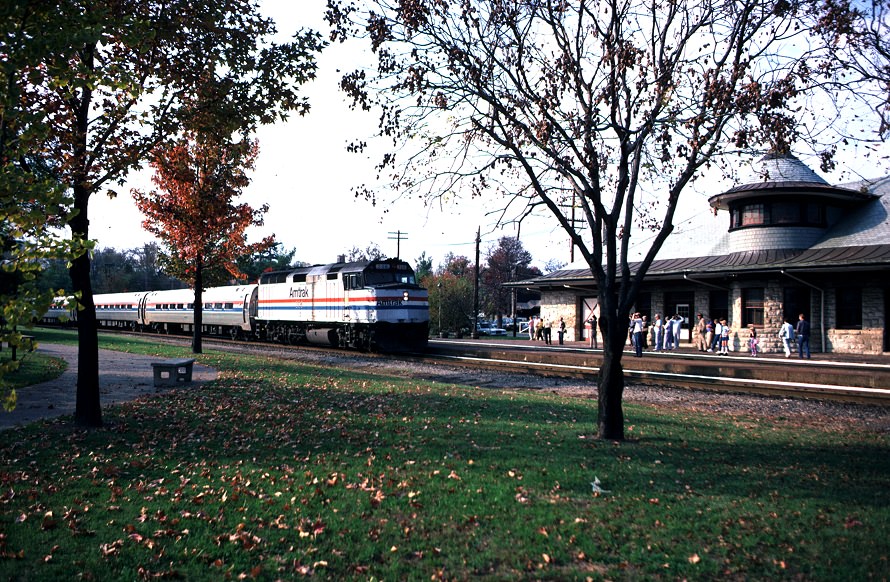 The last Kibitzer gave you a brief history of the St. Louis riverfront, and with that knowledge let me fill in some details. The meet will actually be at the Gateway Convention Center in Collinsville, Illinois in what is called “Metro East.” The proximity to the area’s fine Interstate Highway system makes that an ideal location to venture out to shoot trains. I have selected these locations based on several criteria: variety of railroads, variety of locations, and variety of scenery. We will visit a major yard: the Terminal Railroad Association’s Madison Hump and a beautiful suburban Depot in Kirkwood, Missouri, on the Union Pacific. Lennox Tower with BN, UP, NS, SP, Amtrak and Gateway Western action is where rural Illinois begins and the urban, metropolitan railroading of Gratiot Tower in downtown St. Louis will round out our visits.

160.410, 160.470. Take I-70 west across the Mississippi River. Be aware of the signs for I-44 west, the junction is just across the river! Proceed west to Lindberg Boulevard and go north across the BN tracks, continue to the next set of track (the UP!). Park in the lot on the southeast side of the tracks and explore. There is a small park across from the beautiful stone depot. The depot was previously Missouri Pacific and now hosts two Amtrak trains each way, each day: Westbound 8:35am, 4:55pm, Eastbound 1:06pm, 9:26pm. Don’t miss the Hobby Station hobby shop just south of the depot, on the west side of Lindbergh. The overpass to the west of the station is a great spot for westbounds. By the way, this spot is close to the Museum of Transportation. Several good neighborhood restaurants in the area too! About 45 minutes from the Gateway Convention Center. This is Union Pacific trackage with Southern Pacific trackage rights and lots of traffic, about 36 trains a day. 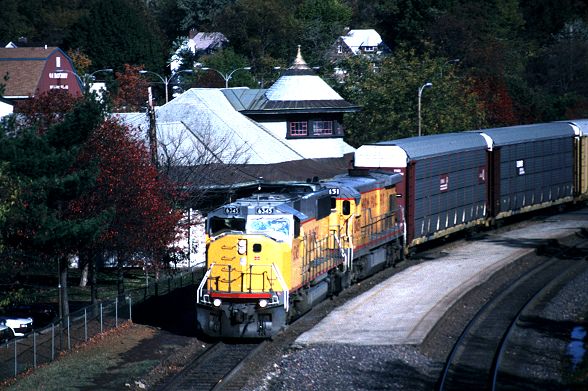 Kirkwood, Missouri. Taken from overpass to west of depot. Westbound UP train SLNPCX, St. Louis-North Platte Manifest. This is a CSX connection with lots of auto traffic for western distribution.

160.500. Near the junction of I-70 and I-44 in downtown St. Louis. As above, take I-70 west across the Mississippi River. Take the Memorial Drive exit and go north. Make the first possible left and go west to 7th street. Follow 7th street south to Choteau and turn right (west). Almost immediately you will turn right onto the old approach to the MacArthur Bridge which is now a parking lot for the headquarters of Ralston Purina (their office building with red and white checkerboards on the top will help confirm you are at the right spot). The old bridge approach is a great vantage point for photos with the tower and downtown St. Louis in the background. You may want to combine this trip with a visit to Union Station several blocks further west. It is a spectacular renovation of one of America’s grandest railroad stations and features lots of great shops and restaurants. 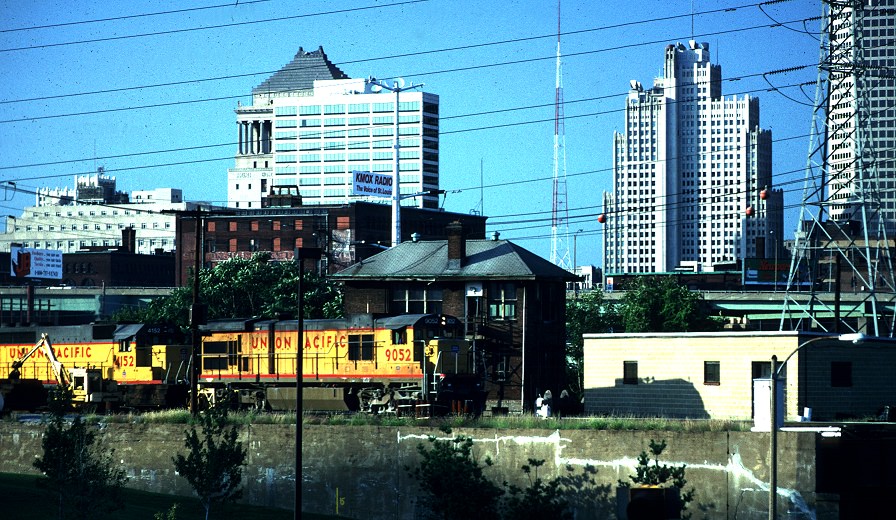 You will see trains of the UP and BN most frequently here, but SP trains and CSX transfers put in appearances too! The most unique trains you will see are the transfer runs of the Manufacturers Railway (160.740) running to the Alton and Southern’s Gateway yard across the river. You will see them on the southern approach to the MacArthur bridge between you and the river. The run normally goes east about midday and the locos are immaculate green, white and gold switchers with orange trim. The railroad is owned by Anheuser Busch Brewery. Conrail power on several run through trains may also be seen at Gratiot. If you only have time for one railfan excursion in the St. Louis area, this is the spot! About 25 minutes from the Gateway Convention Center. Don’t forget the daily Amtrak trains: Westbound, 4:00pm, 9:05pm, 11:30pm and Eastbound, 4:30am, 5:55am, 7:35am, some may be triweekly by summer. The tower is owned by the Terminal Railroad Association of St. Louis and their red switchers are frequent visitors on transfer runs too. 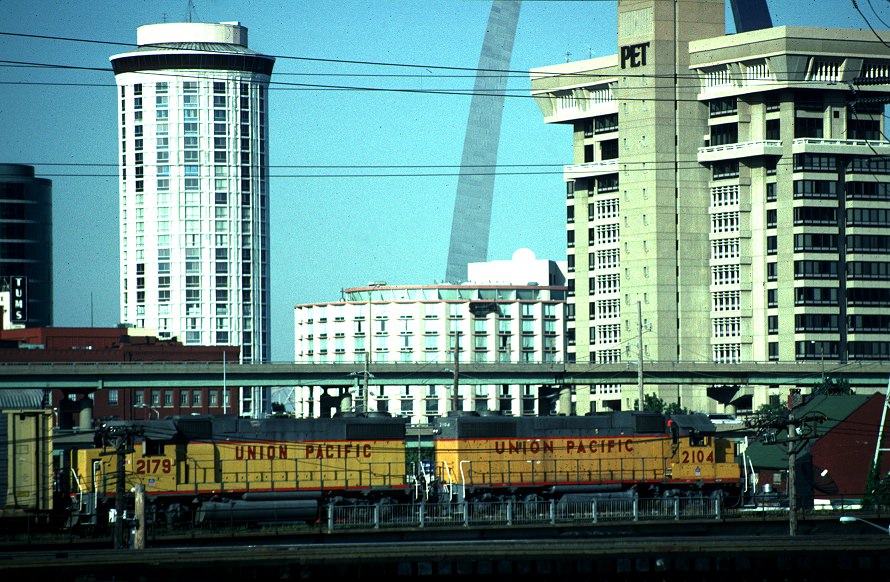 Gratiot Tower. Transfer run to NS North St. Louis Luther Yard on the west side of the Merchants Bridge.

160.770. From the Gateway Convention Center go north on I-255 to I-270 west. Exit at Illinois Route 203 south and then go north and turn right onto Chain of Rocks road. Cross the tracks and to the left on Douglas road to the Alton and Southern tower. Once again this location offers tremendous variety. The NS line to Decatur features railroader service and 10 to 14 trains daily. The BN may show up with an Iron Ore train. You could also spot AT&SF power on the Gateway Western along with their distinctive black and yellow power featuring the Arch logo. The A&S, a switching line owned by UP and SP, has yellow and blue units which service the lumber yard south of the tower. This location is a great choice for an excursion as it is only 15 minutes away from the Gateway Convention Center! 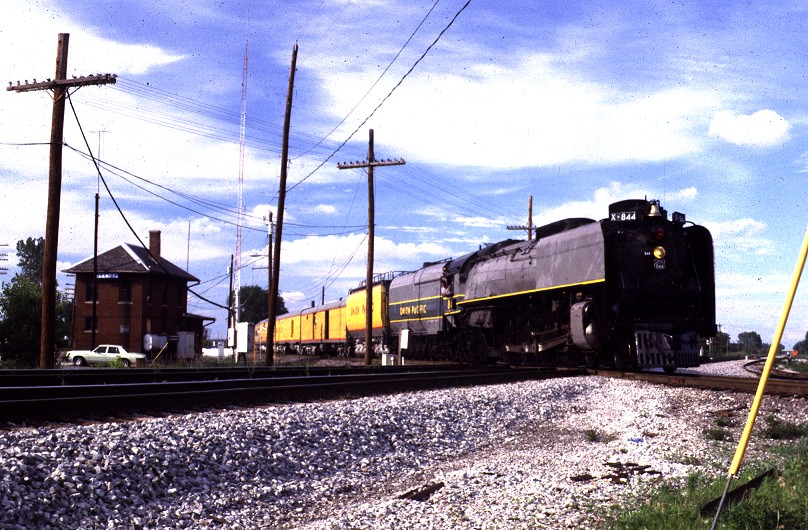 Lennox Tower. Fan trip southbound from Findlay Jct., IL on the former C&EI, former MoPac line at Lennox Tower in Mitchell, IL. This was taken at the NRHS Convention in St. Louis.

160.500. Go west on I-70 to Illinois Route 203 and head north. At 22nd street in Madison go left to Madison Avenue and turn left. Park on the northwest side of the bridge and shoot from the overpass. Looking northwest you see the former location of SH tower and the approach to Merchants Bridge. Merchants is the route across the river for Amtrak trains and NS trains to Luther Yard in north St. Louis. To the southeast is the TRRA’s Madison hump yard. Looking north are the tracks which head towards Lennox Tower through the heavy industrial district of Granite City with its steel mills. This location is only 15 minutes away from the Gateway Convention Center and is your best opportunity if you have very limited time. 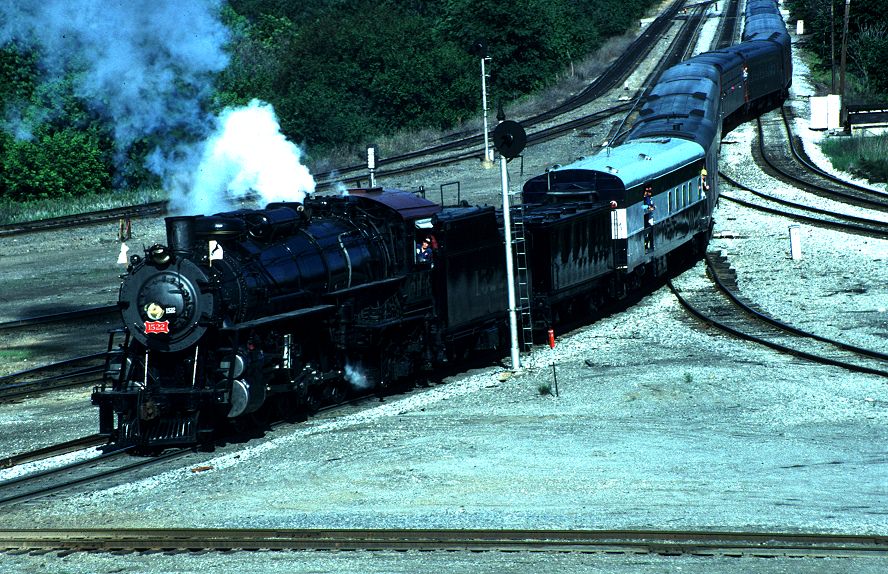 Good luck and good shooting! I hope you find these suggestions useful. Many times, in towns I am unfamiliar with, it takes me so long to find good locations that most of my time is wasted. With this information, you can plan a productive visit and perhaps be stricken enough with the St. Louis railroad scene to return. For more detailed information, may I suggest a story by my friend Don Woodworth in the December 1995 issue of CTC Board, or the classic “Railfans Guide to St. Louis” available from Red Board Hobbies (618-233-3618). Red Board also has Softrails St. Louis Regional Railfan Timetable.