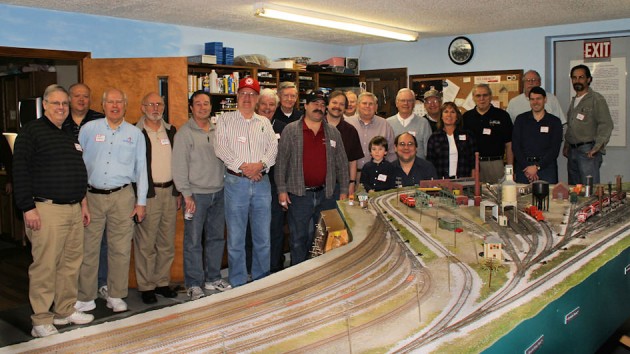 The event took 23 members and guests of both groups to Litchfield, Illinois, to see and operate trains on the Litchfield Train Group HO layout. The Litchfield Train Group has operations set up in the back of an office building on the main floor in two rooms. The layout is very large, about 55 ft. by approximately 44 ft., with great scenery, many fine crafted structures, good running track work and large freight yards. All trains are operated by Digitrax DCC system. A dispatcher directs operations.

The layout in the main room depicts the gentle rolling countryside of Illinois from Centralia to Chicago in the 1950s and 60s while in the smaller room is Chicago in the 70s. The layout offers a lot of operational challenges and opportunities with 500 ft. of track and 55 switches.

The LTG members were great hosts and as happy to see us there as we were to be there. They normally operate twice a month from manually prepared switch lists. Many thanks to the Litchfield Train Group for their great hospitality and the fun we had – Lonnie Bathurst, Mark Lewis, Rev. Mark Schleeter, Jim Shaner, Charlie Sinclair, Tim Stout, David Thackrey, Lance Thackrey and Dan Wanger!