Our “gang” met last week on our annual Spring pilgrimage to the Horseshoe Curve area. Included were Ken Heyl, Allan Silverberg, Stan Swope, Jim Martin, and Bob Hoover; we met up with several other regulars at the Station Inn B&B in Cresson, PA. Had great weather six of the seven days and saw a lot of trains – the railroad was quite busy. Here are a few of the photos I took. 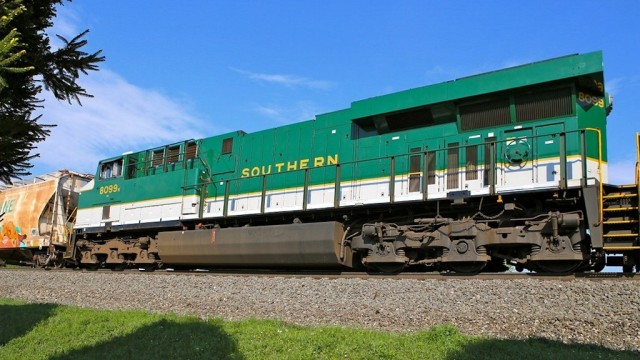 Early one morning, an eastbound mixed freight had this beauty in the consist. This is the Norfolk Southern’s salute to the former Southern Railroad in its Heritage program, highlighting the “fallen flags” that are now a part of the NS system. 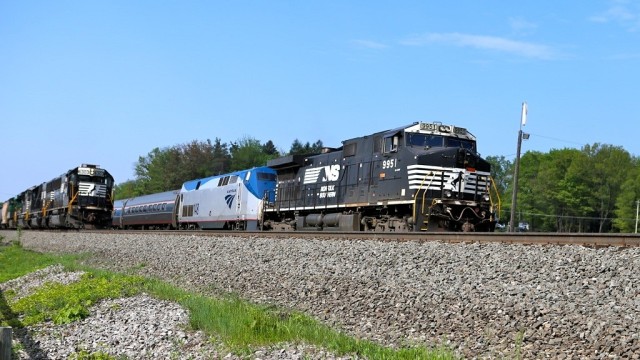 While the freight in the previous photo was stopped, the morning Amtrak Pennsylvanian, on its way from Pittsburgh to New York City, needed an assist from Norfolk Southern, thus, an unfamiliar site of an NS freight engine on the lead. 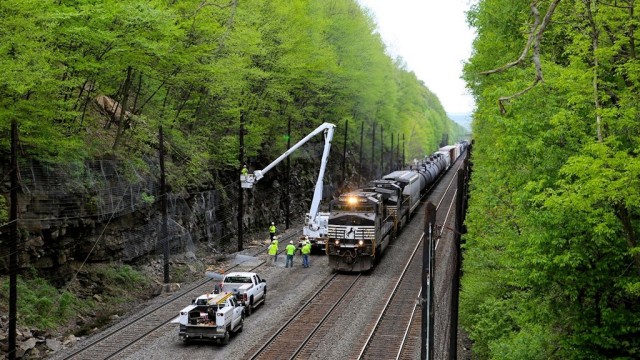 An eastbound mixed freight creeps past crews repairing the slide fence in the cut at Cassandra. The fence is electrified to “drop” red signals should a rock slide break through the fence and down onto the tracks. That has happened earlier and the crews are working hard to get Track One back on line. From the left, are Tracks One (eastbound), Two (both directions), and Three (westbound). Where the trucks are sitting used to be a fourth track that many have seen in older photos but was since removed years ago. 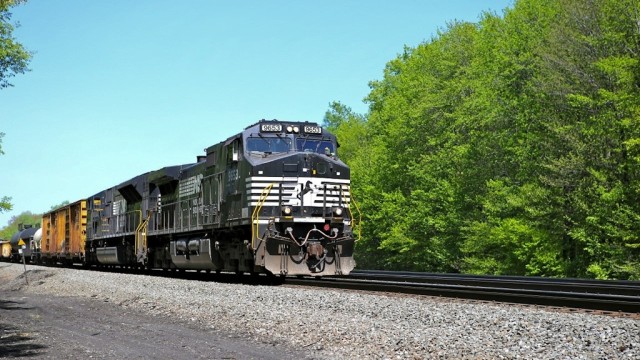 Westbound mixed freight at Carney Crossing, between Cresson and Lilly. This is one of only two road crossings in the some 50 miles of railroad between west Altoona and Johnstown.

One day, three of us (Silverberg, Martin, and I) “chased” the short line Everett Railroad, which runs 25 miles or so from Holidaysburg to Martinsburg through Roaring Springs. It was an entertaining and relaxing day with slow speeds on the railroad, and the good folks at Everett (Jessica, Jason, and Sophia) could not have been nicer in welcoming us, giving us the “switching assignments for the day, and even their personal favorite eating establishments (an important piece of information for any railfan). The railroad currently runs on Monday, Wednesday, and Friday. 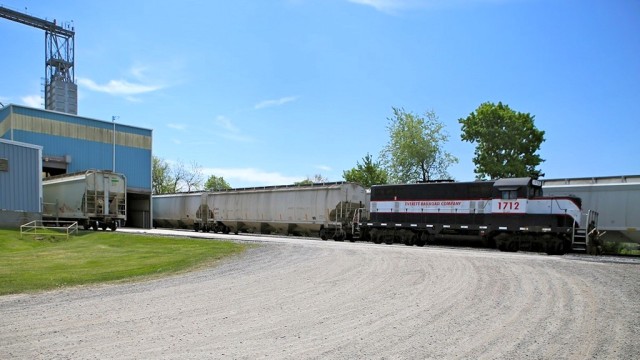 First stop of the day was the Cargill plant at Martinsburg, where Everett dropped off empties and picked up loaded covered hoppers. 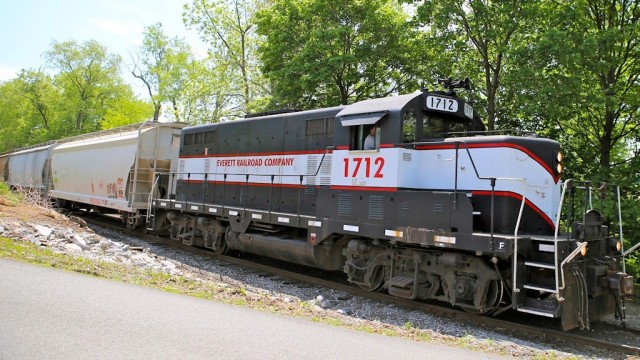 We got ahead of the train (not difficult) after it left Cargill, and waited at a crossing just outside of the Smith Transport Company in Roaring Springs. 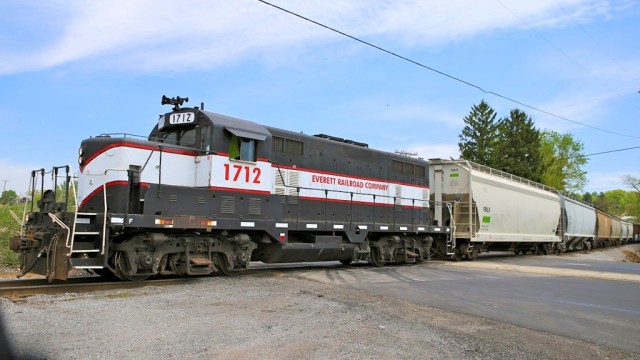 Work at Smith Transport was behind warehouses that we could not access, and here we see the train, with box cars added, leaving Smith. 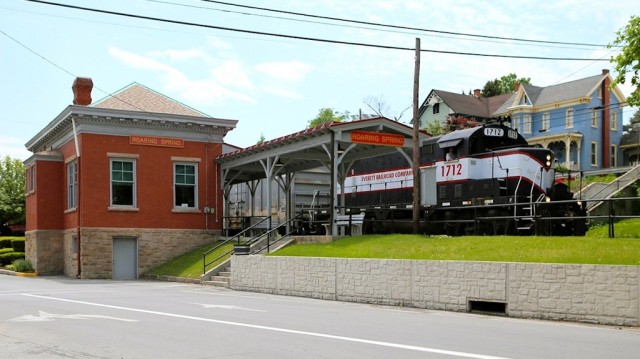 Again, we were able to get ahead of the train and catch #1712 as it passed the historic station in Roaring Springs. We are sitting in the parking lot of Roaring Springs Bottled Water, a popular brand available throughout the country. 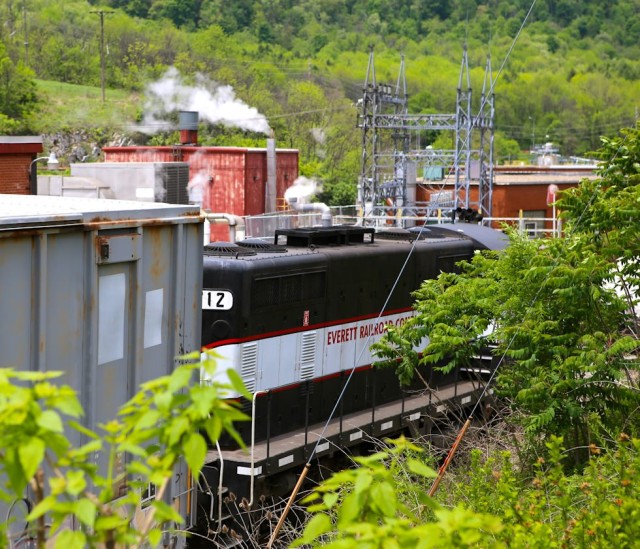 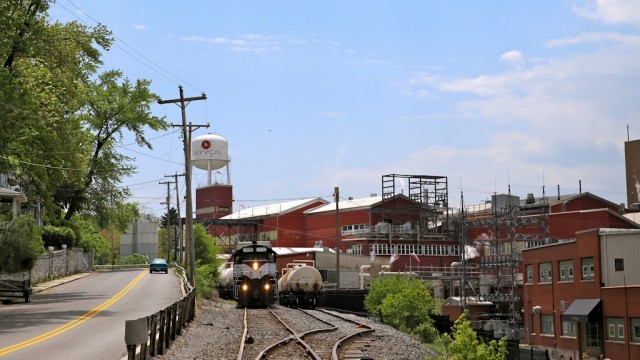 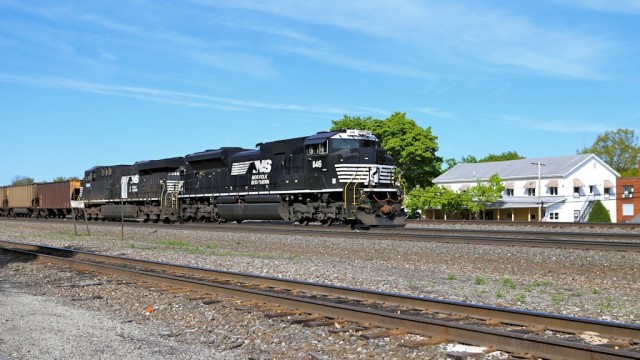 Westbound NS empty hoppers pass the Station Inn, our B&B, in the background with the red & white awnings.