Getting Down to Details – Mailboxes 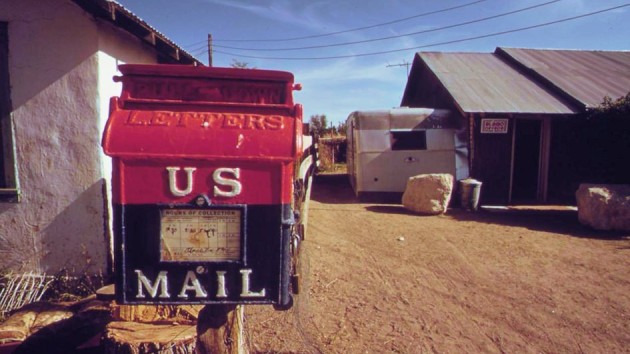 Some years ago I wrote a brief piece for The RPO relating information I had picked up at a national convention. It focused on making sure that details on the layout fit the time frame modeled, and gave approximate times that hay stacks went from stack or square bales to rolled, or when stop signs changed color from black on yellow to white on red. I made a rash statement that “next time” I would tell about mailbox colors. Well, in true US railroad time, here it is.

I contacted the Smithsonian Institution’s Postal Museum through its web site at http://postalmuseum.si.edu. The site had information and drawings on the older boxes that were attached to posts, but not on the larger collection boxes we see today. I remembered that these boxes had been “government green,” then blue with red on top, and currently they are all blue, with white lettering and logos, but wondered which was best for our about-1957 layout. Here is their answer:

“Mailbox color changes happen over several years, and correspond to color themes used by the postal service for other items as well (including vehicles). The first color used was white, which lasted into the end of the 19th century. After that, drab olive green was used. Towards the end of the Second World War, blue became the color of choice, and subsequent to that, blue and red. Following 1971, mailbox and vehicle colors went their separate ways, with vehicles returning to the 19th century white, (with red and white trim) and mailboxes returning to blue.”

Obviously mailbox color transitions did not happen overnight, just as we see now with locomotives and Amoco stations, so depending on your era, several options might be shown. I have spotted the red-over-blue box in the movie “An Affair to Remember” (1957) as Deborah Kerr is running across the street –  and subsequently being hit by a taxi, and, I believe I caught one in the opening credits of the TV show “Archie Bunker’s Place” which ran from 1979-83,  later than the 1971 date given by the Smithsonian’s historian. (Get a life, Venita!)

In larger cities, the drab green boxes used as distribution boxes for mail carriers only may appear next to the public collection box.

Incidentally, the Smithsonian Institution in Washington, D.C. has a wonderful little postal museum on the basement level of the post office across the street from Union Station. When we were there, it had a full-sized RPO car and a continuously running video featuring former RPO workers talking about the old days. It’s worth a visit.