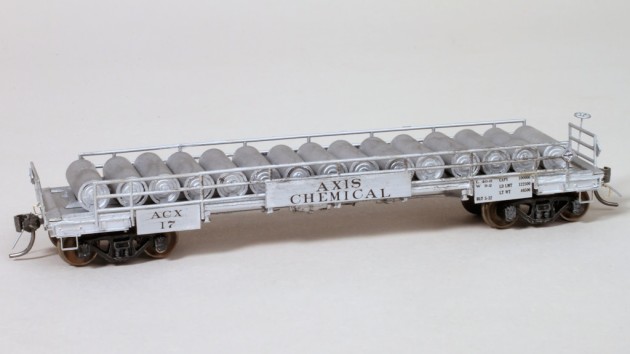 I am a sucker for “interesting” motive power and rolling stock. Several years ago, a good friend loaned me copy of the Kalmbach book Build Your Own Cars & Locos, which was filled with old articles first published in the Model Railroader magazine. Near the end of the book, an article detailing the construction of a chlorine car caught my eye. Since my skills at the time were too primitive the project moved to the back burner. Recent articles in the NMRA Magazine and Model Railroad Craftsman rekindled interest in this car and I drew up plans, drawing from all three sources.

After examining the article, I determined that the X-29 boxcar frame made by Red Caboose (that I had on hand) would serve as a car frame. I started by cutting a piece of 1/32” brass sheet and filed it to size. 0.030×0.060” styrene added to the top of the frame increased its depth leaving gaps in it to receive the train line made from 0.028” wire. The Tichy brake cylinder attached to the frame by its bracket. I attached the frame assembly to the underside of the floor using Zap-A-Gap. Next I closed the ends with 1/8” styrene channel notching the end piece for the draft gear. I added the additional cross bearers using styrene I-bean and diagonal braces using channel. The Tichy brake components came next with brass wire piping and rigging followed by the end hoses, which were also made of wire. Lastly I added Tichy grab irons and stirrups left over from Intermountain tank car kits.

I made 20 cylinders by cutting and filing 5/16” styrene tubing to length and turning Accurail wheel sets, which had the axles cut in half, using a drill and file down to fit inside the cylinder. After inserting the modified wheels into the ends of the tubing, I secured them using Testor’s liquid cement. I then cut off the protruding axle half from each end of the cylinder.

I made 20 cradles using 0.060” square strip styrene and kept the best 16. I turned over the car and marked guide lines in pencil to locate the cradles and glued them in place with Zap-A-Gap. Next I added the walk cut from 2×10 strip-wood starting with the ends and filing the sides to fit. I cut trapezoidal dogs from styrene channel to secure the tanks. I centered them relative to the cradles, butting them against the walks. I test fitted the chlorine tanks in the cradles with the dogs to ensure fit and then removed the tanks until after painting. I cut and spliced the railings from Central Valley fencing, adding mounting brackets cut from styrene angle. I then cut four short and two long letter boards from 0.020×0.250” strip styrene.

Per an article I sprayed the cylinders and car metallic silver. I again test fitted the cylinders, and then secured them with Zap-A-Gap to prevent any accidents.

I installed the letter boards using Zap-A-Gap after using Champ data and Microscale letters and numbers. Axis Chemical, by the way, was the company that Jack Nicholson’s Joker took over in the movie Batman. I added the Hazmat placards and applied paper copies of the correct labels as well as cut levers. I lightly weathered the relatively new car with washes and dry brushing.